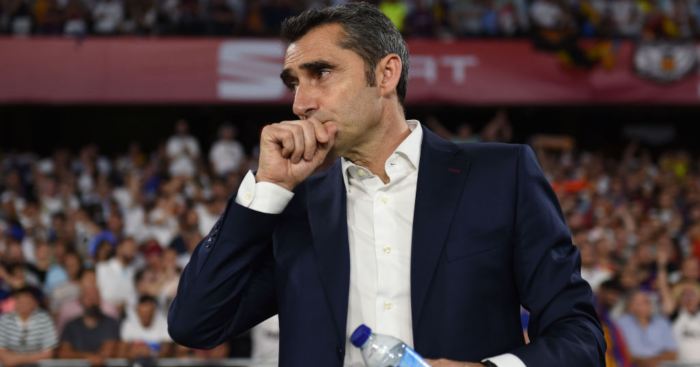 Barcelona coach Ernesto Valverde rejected the suggestion his players had been psychologically scarred by their Champions League experience at the hands of Liverpool.

The Reds’ 4-0 comeback in the European semi-final second leg appeared to still be playing on the Barca squad’s minds in the build up to the Copa del Rey final with captain Lionel Messi admitting it was “tough to get back up”.

That hangover continued as they were beaten 2-1 by Valencia to end the season with just the LaLiga title despite, a month ago, having dreams of a treble.

Valverde, who insists he is ready to renew the fight next season despite speculation over his future, said the tie at Anfield was not responsible for their defeat in Real Betis’ Estadio Benito Villamarin in Seville.

“We have lost, but not because of a psychological issue,” he told a press conference.

“It’s different from the game we played a fortnight ago, but we’ve lost again, that is reality, the feeling.

“We have not been able to fulfil our own expectations: we celebrated the league title, we thought we could make a triplet and we stayed on the road at the decisive moment in the Champions League and in the Copa del Rey.

“You’re left with a bad feeling because we created that expectation and it has not been like that. We’re here to win titles and not for anything else.”

Asked about his feelings, Valverde added: “I’m fine, coaches always want a rematch when we lose, get up the next day and put a challenge ahead of us.

“I know that losing in this club is hard for the coach, because he always makes a mistake even if you do not know why.

“That’s the responsibility and it’s difficult and you have to take it in. And here I am.”

First-half goals from Kevin Gameiro and Rodrigo saw Valencia become the first team since Real Madrid in 1974 to take a two-goal half-time lead against Barcelona in the final of a competition they have won 30 times.

Messi pulled one back with 17 minutes remaining but Valencia held on to win their first trophy since 2008 to make the club’s centenary year one to remember.

“Valencia deserved to win. I feel an immense, indescribable happiness.

“It would be impossible to win a title to Barca, win this Copa del Rey, without suffering, but I also believed that in any counter-attack we could score the third.

“They dominated us (Barcelona had 77 per cent possession) as we predicted, we had to suffer, but we have competed at a great level.”