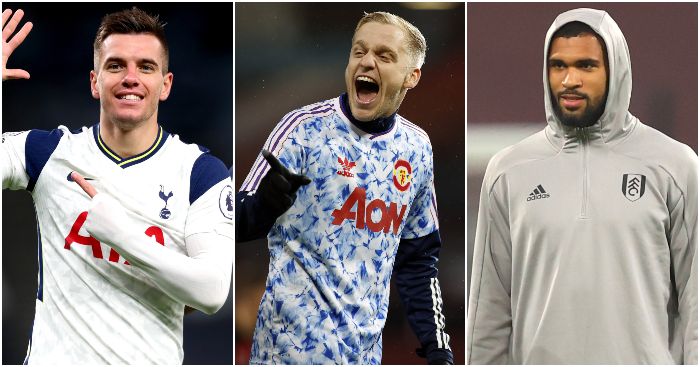 ARSENAL: Eddie Nketiah
It’s not working in front of goal for anyone else, so why not try the boy with the ridiculous scoring record at just about every level of football? It has to be a better idea than playing Willian as a false 9. Or playing Willian at all. We are pretty sure that Nketiah has never taken a plane to Dubai just to pose with Salt Bae.

ASTON VILLA: Conor Hourihane
John McGinn and Douglas Luiz were both poor against Brighton at the weekend and it’s little wonder; both them and Jack Grealish have got through an awful lot of work this season. There’s surely no point pushing and pushing until they break when you have a perfectly serviceable central midfielder on the bench who was pivotal in the 3-0 win over Fulham before he was cast aside for Ross Barkley.

BRIGHTON: Aaron Connolly
No goals for Neal Maupay since the start of October and it’s really not for the want of trying; he misses and misses and misses. It might just be time to give a recall to the Irishman, who is fit again after a niggling injury.

BURNLEY: N/A
As if Sean Dyche is going to change anything about that Burnley side now they have finally got a win.

CHELSEA: Olivier Giroud
“Oli will get his minutes because we have a busy schedule, we play every few days,” said Lampard after Giroud’s goal beat Rennes and claimed a Champions League last-16 place for Chelsea. “He’s getting better with age if anything in terms of how he looks after himself. So he offers a lot for us and I keep saying it but the big schedule coming up and the way we play means I will rely on players.”

Just start him against Tottenham, Frank.

Giroud has scored 11 goals in his last 25 appearances for #CFC. To put that record into further perspective, only one of his last nine appearances have been from the start. https://t.co/PXwD5G5uqr

CRYSTAL PALACE: Gary Cahill
Surely nothing will persuade Roy Hodgson to recall the fully fit Cahill more than watching Scott Dann and Cheikhou Kouyate lumber around and struggle even against Burnley on Monday. They need fresh legs and who has fresher legs than a 34-year-old former England international?

EVERTON: Robin Olsen
Jordan Pickford has conceded 11 goals in his last five Premier League games. It is utterly bizarre that Carlo Ancelotti brought Olsen in for just one game and promptly recalled Pickford again, as if he hadn’t been a walking and occasionally jumping disaster all season.

FULHAM: Ruben Loftus-Cheek
It’s hard to fathom how Loftus-Cheek – an England international who some would have kept at Chelsea this season – cannot get into a Fulham side that looked destined for a relegation battle from the second they got promoted. But after earning a penalty and scoring against Everton last weekend, he will surely be promoted.

LEEDS UNITED: Rodrigo
Only Marcelo Bielsa would sign a Spanish international striker and keep him on the bench rather more often that he plays. But Rodrigo was excellent when he came on against Arsenal, showcasing intelligence, movement and two shots that crashed off the woodwork. With Bamford now suffocated by opposition defenders, Leeds might have to try someone with a little more nous.

LEICESTER CITY: Hamza Choudhury
After finding him down the back of the sofa, Brendan Rodgers has worked Nampalys Mendy to the bone this season. He was poor against Liverpool and it might be time to trust Choudhury again; he has got through four Europa League games without even picking up a booking.

LIVERPOOL: Neco Williams
Jurgen Klopp did not trust the Welshman quite enough to start him in Trent Alexander-Arnold’s stead against Leicester but he showed enough composure in his 37 minutes off the bench to suggest that – against weaker opposition, at least – James Milner could take a day off from being the best at at all of the positions all the time. Atalanta wasn’t great, mind.

MANCHESTER CITY: Phil Foden
We have lost count of the number of times we have been moved to defend Pep Guardiola over his perceived mishandling of Foden but even we cannot fathom why England’s new darling has not started in the Premier League for a pretty toothless Manchester City side since mid-October. It made sod all sense even before he scored again in the Champions League.

NEWCASTLE UNITED: Andy Carroll
Because at this point, things really could not get much worse. And he really is better than Joelinton – even on one (very long) leg.

Andy Carroll has scored three goals in three and a half years. But somehow still radiates Total Danger

SHEFFIELD UNITED: Oliver Burke
“Oli has a part to play in certain games and it was like that last year with (Lys) Mousset, Didzy (David McGoldrick), the skipper (Billy Sharp) and Oli Mac and it will be that way right the way through. Unless somebody finds a big period of form and goals,” said Chris Wilder, who has not even brought Burke off the bench for over a month. Something has to change and at some point pace might have to be backed over heft.

SOUTHAMPTON: Ibrahima Diallo
With Oriel Romeu and James Ward-Prowse playing practically every minute this season (and looking tired v Wolves on Monday night), it might be time to give £13.5m Frenchman Diallo more than 11 minutes, which is still the longest of his four Premier League cameos this season.

TOTTENHAM HOTSPUR: Giovani Lo Celso
One of our questions for Tottenham during the international break was whether they could find a way to get Tanguy Ndombele and Lo Celso on the pitch at the same time. But once again we saw one replacing the other against Manchester City; Lo Celso’s goal within seconds should strengthen his case for more than a cameo.

WEST BROM: Callum Robinson
The Baggies looked so much better against Manchester United when Grady Diangana made way for Callum Robinson, who rattled the woodwork at Old Trafford. Robinson was unlucky to be the player dropped to the bench after a lively performance against Spurs before the international break and really should be in this team ahead of the disappointing Diangana.

WEST HAM: Manuel Lanzini
A goal against Tottenham did not earn him a start so we doubt that 14 lively minutes against Sheffield United will do the trick, but there will come a point – and that might be soon – when either Jarrod Bowen or Pablo Fornals will need a rest. Lanzini is not the worst player to have in reserve even if David Moyes is clearly loath to use him.

WOLVES: Marcal
Excellent on his first Premier League start against Sheffield United but an injury eight minutes into his second appearance kept him out for almost a month. Since then he has been reduced to bit-part appearances but a quick Twitter search confirms that Wolves fans would rather see the experienced Brazilian start at left-back over the raw Rayan Aït-Nouri.