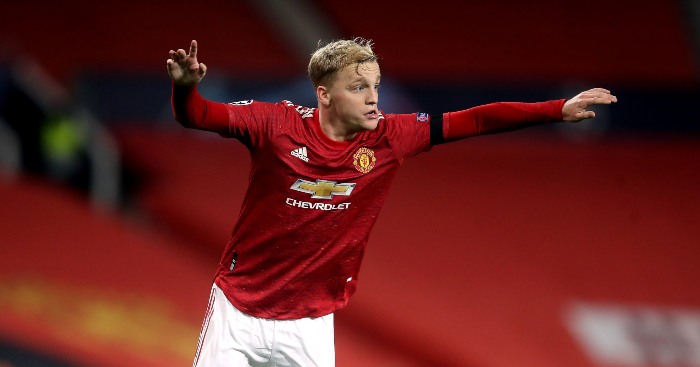 Thanks for your e-mails on Donny van de Beek and more. Send your thoughts to theeditor@football365.com

On Bruno Penandes
Even I’m beginning to wonder now how that Penandes became a professional footballer…
Manyooligan (BOOM!) SoC

Five Man United conclusions
1. Cavani is United’s number 9. Week in, week out. His work rate, craft, intelligence and downright sneakiness is simply first-rate. With back-to-goal he is a focal point MUFC have been missing. I haven’t seen an outright striker of his ability play for United for many, many years. He can only bring the best out of Martial, Rashford and Greenwood;

2. Donny van de Beek may not have been Ole’s first choice for the summer transfer market just gone but he should have been high up on it. Potential coming-of-age performance in central midfield in a United shirt tonight. His link-up play, desire to play forward and even tackling were a refreshing sight. Watching him slink around the midfield was like a touch of Scholes. Master the raking cross-field diagonal on the regular and that position is his;

3. For Van De Beek’s breakout, confirmation that Fred is not the future. Not cut out for the top level. His half-turns are too clumsy and his passing accuracy and range is not that of a top-drawer midfielder. A defensive balance in the form of McTominay would be needed as the foil to Van De Beek’s invention;

4. Bruno Fernandes is the main man. There is a clear drop-off without him on the field. A leader who gives up his own hat trick to get his teammate on the score sheet. He is the club captain in all but name; and

5. Dan James. Devoid of confidence. Finally took his man on and ran at him in the 90th minute. That’s what he was brought in for – pace and direct running. It is what gave him success in his early United days and gives him success for Wales. Go back to basics, Dan and do what you’re good at. Nice finish on the counter-attack at the time of writing; and

6. Tuanzebe has to be the natural partner for the ocean liner HMS Maguire. His pace and power is needed. I’ve been sceptical of Maguire’s defensive capabilities for over a year now. Exemplified by the two men chasing back from a United corner in recovery. Tuanzebe at full pace arrived on the back line 5-7 seconds before Maguire at ease.
Tom (MUFC – Telles’ corners have some whip)

We will need a proper DMF for that to work, mind.
Thomas, Korea (No, Fred does not count)

Job done for Chelsea
Chelsea getting the job done against Rennes, that is what mattered last night, Rennes are a did a few see as a walkover but I think many Chelsea fans know this is never the case with any team you play in the Champions League.

Callum Hudson-Odoi showcased his talent, Mason Mount was delightful, ooooft what an assist he laid on for CHO’s goal, oh and of course Olivier Giroud with the group qualification sealing header, lovely stuff from a lovely true professional, next up can we win the group? Possible, but this year even if you win the group you could still face the likes of Atletico Madrid, Lazio or even Juventus results depending, a tough round no matter what.

Special mention for Bruno Fernandes, what a lovely strike and performance from him for United, he truly is a diamond in that United side, so much so that I wonder how long it’ll be before bids from the so called bigger or richer clubs start to come in, be it Real Madrid, PSG Etc, unlikely Barcelona due to their finances right now, but could easily see Madrid looking at him and even though many will argue PSG aren’t a bigger club which is fair, they are still very very wealthy.
Mikey, CFC

Is KDB world class after all?
It’s been interesting to see the mailbox use the ratio of a player’s assists to total team goals in an attempt to show De Bruyne is overrated.

This kind of analysis is often used to highlight players of remarkable talent playing in otherwise humdrum teams. Otherwise known as the Matt Le Tissier Award. A quick check of the stats and, yep, in 1994/95 Le Tis contributed 15 assists of Southampton’s 61 goals, or 25%. Better than KDB’s 19%. But does this say more about Le Tissier or more about the awful Saints sides he was part of? A bit of both I think.

A more recent example is Ryan Fraser who in 2018/19 assisted 14 of a bang average Bournemouth’s 56 goals (also 25%). I guess this puts him above KDB on the world-class-o-meter? He seemed to think so, and so he downed tools until he got his big move… oh he’s now at Newcastle. What?

However, there is a player who has a better ratio of assists to total team goals than Lampard, Fabregas, Nani, Ozil, or even Izzet. And that player is… Kevin de Bruyne 2020/21.

Despite City only scoring a meagre 10 goals so far this season, KDB has helped himself to 3 assists – that’s 30% of City’s total team goals! Obviously, being part of a severely malfunctioning team only makes this feat more impressive! I’m sure we can all join together in congratulating the ginger prince on his magnificent improvement since last season.
Bristol Blue

Separating opinions from argument
Dear Sam LFC, I hate to break it to you but no. Your comments classify as ad hominem attacks, but not footballing arguments. Allow me to elucidate, since you ask.

No, there is no logic to ’the right time to look at the table is after Christmas’. No more than the right time to decide if a team is playing well in a game is after the 40th minute of the match. It’s an arbitrary number and a quarter of the season is more than adequate especially on the basis that plenty of managers get sacked by this point, and there is broad agreement for example, including on this website, that Man City are not title challengers this season on the basis of the same number of games.

Your Wank Bag argument about Ole is even less of a footballing argument than Ali Dia was a Premier League footballer. File under ‘must try harder’. There are plenty of areas where Ole merits criticism. Open goal missed there.

‘At least Arsenal were able to sign a player’ is a strange attempt at whatever point you’re trying to make, as both Arsenal and United effectively signed a Defender, a midfielder and a senior striker on a free transfer, this season. What was your point again?

Your comment on Pep again refers to what I should or should not say, but I see you steered clear of why after spending nearly half a billion ponds on defenders, he’s still not got a great defence. Footballing argument, you say?

And finally your ending note of ‘Ole is still tactically naive and unable to motivate his players, utd are treading water under him in terms of results and performances. Footballing enough for you?’ – footballing yes, and even with a swimming metaphor thrown in, but sadly still opinion rather than any kind of argument. Had you tried to offer a a reason why a team that can put PSG and RB Leipzig to the sword struggle to motivate themselves for West Brom, you might have had a point.

Hope that clears it up, and not TL/DR for you.
Ved Sen, MUFC

Just do your research
I have seen a lot in the mailbox about pronouncing names etc. As an expat in the US the commentary can be a bit hit or miss. However I was watching the Champions League and they did a little segment with Nico Cantor and he spoke about having facts but also researching the pronunciation. Watching Chelsea v Rennes he was absolutely excellent in that department, from Rennes through to Camavinga to Kovacic. If only everyone could be more like him!
Stuart (Scotsman in the states) NJ

Things we got wrong
Something else you all got wrong: Going to the monitors does not solve the VAR problem. I don’t know why everyone was so naive to think that the on-field ref would understand the basic rules of the game compared to the VAR, as if the VAR was some newbie to the sport. Although, I know it does feel that way, every time.
Gerard, Belfast

Less thunder b@stards these days
After watching a clip of all 186 of Steven Gerrard’s Liverpool goals ( https://m.youtube.com/watch?v=DlceSLFU7co) (For anyone who needs something motivational and who also happens to be a Liverpool fan this is a much watch) a random thought came to mind; are there less scorchers from distance in football these days? I don’t mean any goal from outside the area (for which I’m sure there are stats on), I especially mean power shots with the laces (as opposed to curled efforts a la Coutinho). For me there are likely a few reasons why this might be the case:

4) shooting technique has changed? I’m not sure about this one and would be good to get other peoples opinions but it seems that more footballers either side foot or knuckle shots rather than hitting across the ball with the laces these days – might be how players are now coached / hitting with the laces is not as accurate??

All in all it would be interesting to see if Gerrard, Lampard, etc would score as many scorchers in modern football as they did 10-15 years ago, maybe all the points above are wrong and it’s just we don’t have players like the two mentioned in the game currently who love to shoot from distance.