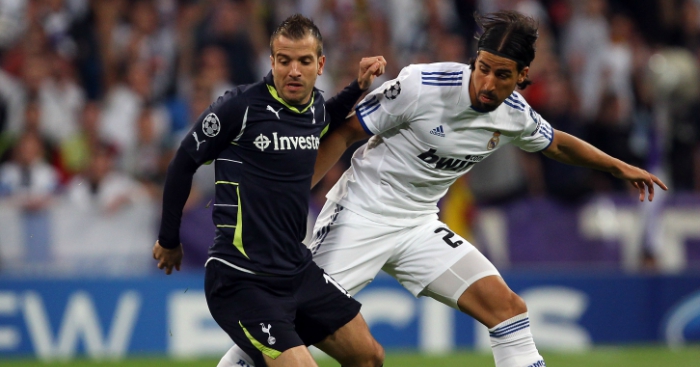 Only 14 minutes had passed when Peter Crouch, already on a yellow card, flew in late on Marcelo in 2011 and was dismissed to consign Harry Redknapp’s side to two Champions League quarter-final legs of defeat.

Down to 10 men, Tottenham were crushed 4-0 in the Santiago Bernabeu and Van der Vaart paid a particularly high price.

He was shoehorned into Crouch’s role of lone target-man, booked, and then replaced after 46 minutes by Jermain Defoe. A 1-0 loss at White Hart Lane confirmed a disappointing end to an otherwise exhilarating campaign.

“I was angry after, of course, in the changing room to be honest I found it difficult to speak,” Van der Vaart told Press Association Sport.

“It all turned on that red card. We had started so well in the Champions League, it was really something special that year. It was a hard one to take.”

They had taken the tournament by storm, inspired by the power of Gareth Bale and craft of Luka Modric. Bale demolished Inter Milan in the groups before Crouch’s winner knocked out AC in the last 16.

Bale, who may not be fit, and Modric will both be donning Madrid colours when Tottenham walk out at the Bernabeu on Tuesday but Van der Vaart says their Spurs successors have something extra.

“We had four or five stand-out players you come to the stadium to watch but now with Tottenham you come for the whole team,” Van der Vaart said.

“They need to use that against Madrid because this is the biggest difference now and also their biggest strength. They are a fantastic team.”