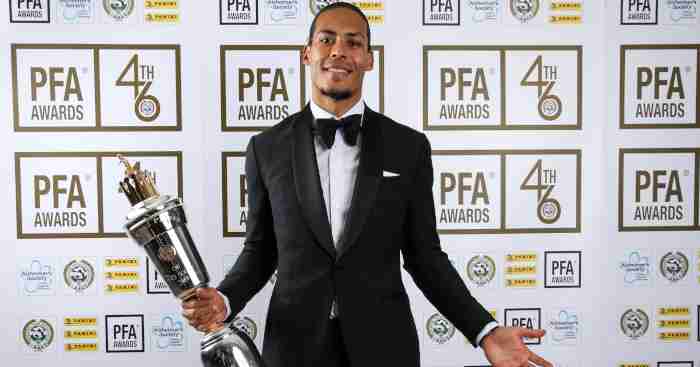 Liverpool centre-back Virgil Van Dijk has been named the Professional Footballers’ Association’s Players’ Player of the Year for 2019 after a stellar season for the Reds.

Sterling had the consolation of being named Young Player of the Year, following in the footsteps of City team-mate Leroy Sane.

Van Dijk signed for Liverpool from Southampton for £75million in January 2018 and has been an ever-present rock at the heart of the Premier League’s tightest defence this campaign.

The 27-year-old has helped Liverpool keep 19 clean sheets and concede only 20 times, while also chipping in with three goals.

Liverpool have lost just one game in the Premier League this season in a title race with champions Manchester City which is set to go down to the final day of the season.

He said: “It’s pretty difficult to put into words. I think it’s the highest honour you can get as a player to get voted player of the year by the players you play against every week. It’s special. I’m very proud and honoured to receive it.”

Only two defenders have previously won the award and the Dutchman added: “If you see the standard of strikers or playmakers we have in the league, it’s unbelievable.

“If you see the shortlist and quality there is, it’s very special that the players in the league voted for me. I won’t take it for granted. It’s just very special.”

Van Dijk was chosen from a shortlist made up of team-mate Sadio Mane, the Manchester City trio of Sterling, Sergio Aguero and Bernardo Silva and Chelsea’s Eden Hazard.

Sterling has received wide acclaim both for his impressive displays on the pitch and for taking an active role in highlighting football’s continued problem with racism.

Arsenal Women forward Vivianne Miedema won the Women’s Player of the Year award after scoring 22 times to lead the Gunners to their first title since 2012.

They were crowned champions with a 4-0 win away to Brighton on Sunday.

Miedema had also been nominated for the Young Player of the Year award but that went to Manchester City forward Georgia Stanway.

“I’m just really happy I could help my team all season long with scoring goals and it means a lot.”

The 31-year-old defender was named in the PFA’s Women’s Super League Team of the Year and is set to skipper the Lionesses at this summer’s World Cup in France.

Houghton has been one of the leading lights in the English women’s game and has drawn praise from England Women coach Phil Neville for her handling of difficulties in her personal life.

Her husband, former Liverpool midfielder Stephen Darby, was diagnosed with motor neurone disease last year and she has stated that she would give up her place at this summer’s finals to care for him if necessary, though he has said he will not let her do that.