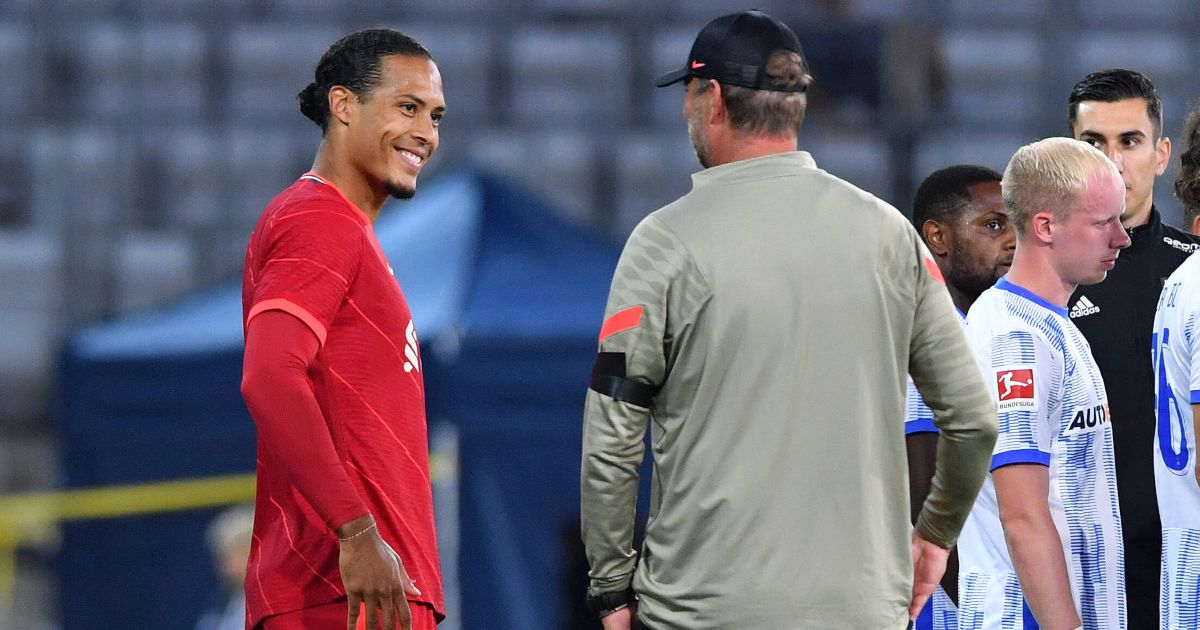 Liverpool defender Virgil Van Dijk will step up his comeback in a friendly against Bologna on Thursday but admits he does not yet know when manager Jurgen Klopp will clear him for Premier League action.

The Holland captain is likely to add another half an hour to the 20 minutes he played against Hertha Berlin last week in his first appearance since rupturing the anterior cruciate ligament in his right knee in October.

However, with the club being cautious over the return of him and fellow centre-back Joe Gomez, who sustained a season-ending knee injury in November, there appears to still be some way to go before the pair are passed fit for competitive duty.

Liverpool’s league season starts at Norwich a week on Saturday but Van Dijk is just taking things day by day after so long out.

“I’m doing well. It’s obviously been a tough pre-season, coming back from such a long time (out) to be playing and training with the boys again is a big thing,” he told liverpoolfc.com.

“After the (Hertha) game, I was empty, drained. I’d played 20 minutes but it wasn’t because of the game, it was because of everything that had happened the whole week and the whole day.

“We are in close contact with Andreas (Kornmayer, head of fitness and conditioning) making sure we are giving the right feedback: we have to be honest with ourselves, and that’s how we are where we are at the moment.

“The same goes now for Thursday; I’ve heard we’ll play at least 30 minutes, but it could be maybe longer, and then we just build it up.

“We have another friendly which I am looking forward to at Anfield, of course, at the weekend or on Monday, one of the two, so I will get more minutes then if things go well.

“Then the league will start. At the end of the day, it’s all about what the manager wants and we will see how it progresses.”

Ready to push on 💪

The squad have relocated from Austria to Evian in France for a change of scenery as they fine-tune preparations before returning home for final friendlies against Athletic Bilbao and Osasuna on Sunday and Monday.

Despite his considerable experience Van Dijk admits he was excited by his return for the four-week pre-season training camp having spent so long on the sidelines.

“It’s been tough at times. The start of team training was such a big day for me; normally I don’t really get nervous but those kind of small things make me, not nervous, but a bit excited and stuff,” he added.

“The same goes for the game – you’ve been visualising so many times yourself playing a game again and just to be out there again.

“There are obviously plenty of things to improve still and to get back to full fitness, but to get out there again gave me so much confidence.

“I am just ready to crack on, to push on again. That’s what I want to do, so I just keep going and the next one is on Thursday.”

🎥 Follow along as the Reds step up their pre-season preparations in Evian 💪#LFCPreSeason https://t.co/tAd5wKuxJX

Liverpool will need Van Dijk back in the side and back to his best for the whole season if they are to challenge, along with the likes of Manchester United and Chelsea, the dominance of Manchester City.

Klopp’s side won eight and drew two of their last 10 league matches to unexpectedly finished third having been seven points adrift of Champions League qualification in eighth in early March.

“It is going to be a tough one with teams that are improving all around us, trying to compete to become champions of the Premier League. So are we – we want to be up there again,” said Van Dijk.

“We have the quality – that is obvious – we were just very unlucky with injuries last year.

“The base layer of success (is) to have that right team spirit. Then it’s all about what happens on the pitch in that 95 minutes.

“That’s the focus we should have and I am confident that will happen.”

Midfielder Thiago Alcantara, who joined the squad last week after his Euro 2020 involvement with Spain, will not feature on Thursday with a minor injury issue.