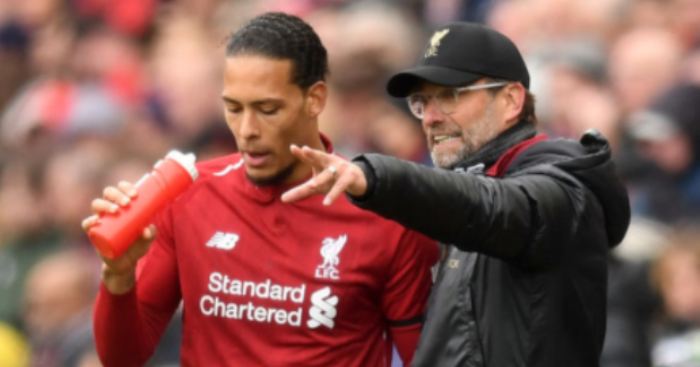 Liverpool’s Virgil van Dijk has opened up about the race for the Premier League title and played down people saying he is the best defender in the world.

The Reds currently lead Manchester City – who have a game in hand – at the top of the Premier League by two points after their impressive 2-0 victory over Chelsea, thanks to goals from Sadio Mane and Mohamed Salah.

“I’m feeling positive,” Van Dijk said. “We are in a position right now where anything is still possible.

“You can’t prepare yourself for these situations – you just need to experience it and deal with it, and we have players who can handle everything that we’re going through now.

“It’s the last month of the Premier League season now and we understand that we have to give even more than maybe we have done already and we’ll see if that’s enough.

“I’m not nervous, no. That’s something that I definitely never am anymore. I do get angry at times at myself, and it’s just a reaction because we want to win games and we want to give everything because we work so hard together.

“On the pitch it is more excitement than nerves. You want to go out there and show the best of yourself to your fans and your family, to perform and do well.”

Lots of pundits have made glowing statements about Van Dijk in recent weeks with some saying he is the best defender in the world at the moment, however the Dutchman has moved to play down the talk.

“Nobody can really claim that title – it’s just about opinions,” Van Dijk told Liverpool’s official matchday programme. “We just need to enjoy it when players are doing well for their teams and I’m feeling good at the moment.

“Obviously there are a lot of expectations when you come to a club for a record fee but you can’t change that.

“You just need to perform and show it on the pitch and gain respect through that. I’ve tried to do that since day one and it’s been going all right.

“There are plenty of good central defenders around and I enjoy watching them.

“If I watch big games like the Champions League on TV then I’m definitely watching what different centre-backs are doing in certain situations.

“When people are talking about you in a positive way, that’s always a good thing. But, basically, that’s it.”