Liverpool could be without Van Dijk for the season. Pickford, meanwhile, will probably play next week. 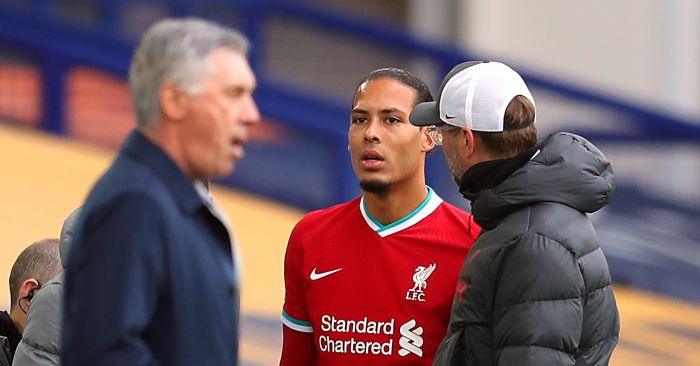 Liverpool have announced Virgil van Dijk needs surgery on the knee injury he sustained during Saturday’s 2-2 draw at Everton.

The Dutch centre-back has damaged knee ligaments following the reckless challenge on him by Toffees goalkeeper Jordan Pickford after six minutes at Goodison Park.

Van Dijk was able to walk off the field but a further assessment on the injury has revealed an operation will be needed.

The Reds say no specific timescale is being placed upon his return to action at this stage.

It is a nightmare scenario for Liverpool. Van Dijk had not previously missed a minute of Premier League action since September 2019 and his influence on the team has been instrumental in them winning the Champions League and Premier League in the last two seasons.

The club are more hopeful summer signing Thiago Alcantara, who also had a scan on a knee late on Saturday after the high tackle which saw Richarlison sent off, is not serious.

However, manager Jurgen Klopp is now having to consider what life for his team will mean without the 29-year-old Van Dijk for what is set to be significant length of time.

The Reds boss opted not to sign a replacement when Dejan Lovren moved to Zenit St Petersburg in the summer, insisting midfielder Fabinho could fill in at the back – and he has done already this season.

But having replaced the out-of-form Joe Gomez with Joel Matip, playing his first match since the opening day of the season at Goodison Park, Klopp faces having to pair the untested and injury-troubled duo against Ajax in the Champions League on Wednesday.

The 23-year-old Nat Phillips, with just one FA Cup appearance to his name either side of two loan spells at Stuttgart last season, is now the back-up option with the highly-rated but unproven 17-year-old Billy Koumetio another alternative.

Liverpool’s defence has looked leaky already this season, conceding 13 goals in five matches – including seven at Aston Villa – with Van Dijk in the back four so his absence will raise real questions about their chances of staying the distance in a title race.

Klopp, however, was keen to throw his backing behind Gomez after a shaky couple of weeks.

“Joe Gomez played a sensational game. A good game. I am not worried about the boys.

“The problem we have at the moment is that I am not really in a good mood, I have injured players in the dressing room and that is not good.”

The only thing in Liverpool’s favour would be that no team is defending that well so far and Liverpool’s attacking options are among the best in the league.

Not that it made much difference at Goodison Park where they were twice pegged back having gone ahead after three minutes through Sadio Mane and then Mohamed Salah’s 100th goal in 159 matches, a brilliantly instinctive volley.

Two headers were their undoing, the first from Michael Keane at a corner and then an inviting Lucas Digne cross giving Dominic Calvert-Lewin the chance to do what he does best and hang in the air at the far post to outjump Andy Robertson and beat Adrian.

Liverpool have lodged a request with the Premier League asking for a review of the VAR decisions.

They have asked why Pickford’s challenge on Van Dijk was not considered for a red card just because the Dutchman had been ruled offside by a replay and also for an explanation on the mechanics which saw Mane ruled offside in the build-up to what would have been a Jordan Henderson added-time winner.