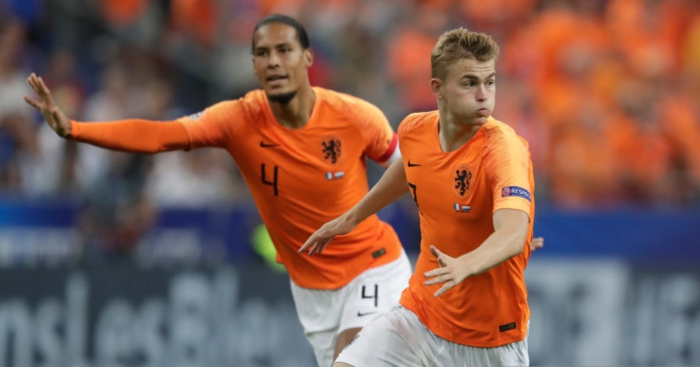 De Ligt has burst onto the scene for Ajax recently, making his debut in the 2016/17 season before firmly establishing himself in the first team in 2017/18.

His form and rapid development has earned admiring glances from both Manchester clubs and Barcelona, as well as a rather ambitious Tottenham.

Liverpool have not been linked with the 19-year-old, but Van Dijk was asked about the progress of his international teammate.

“He is already very far, especially at that age,” he told De Telegraaf.

“A good defender, good boy, calm, knows what he wants and hopefully he makes the right choice in his next step.”

When asked whether that “next step” could be Liverpool, Van Dijk said: “He will be on the list, because they have enough scouts at the club.”

He was then quizzed as to whether he might be the club’s best scout as he has seen De Ligt at international level with the Netherlands.

“No,” Van Dijk replied. “But if they need my opinion at Liverpool, I’ll give it.”

De Ligt would reportedly cost around £44m for any potential suitor, meaning Van Dijk’s £75m January fee would remain the record for a defender.

“No, they will pay less for Matthijs,” Van Dijk replied when asked whether he thought De Ligt would cost more.

“The amount for me was very high, though. In all seriousness, it’s just like that and, if he ever becomes the most expensive defender, I’ll be the first to congratulate him.”