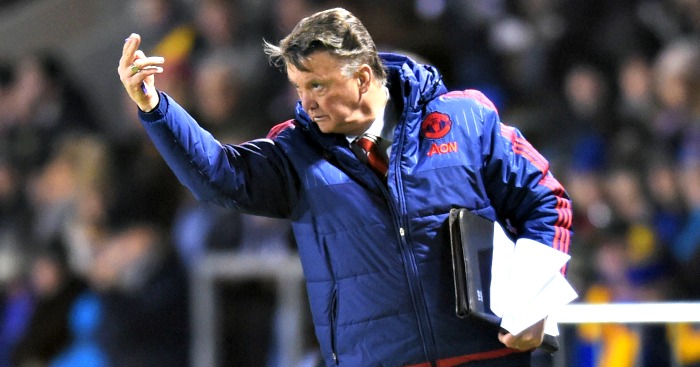 Louis van Gaal has defended Marouane Fellaini by pulling the hair of a Sky Sports reporter.

Fellaini was fortunate not to be seen by Michael Oliver when he elbowed Robert Huth in the face during the first half of the 1-1 draw between Manchester United and Leicester.

Foxes defender Huth was pulling the hair of the Belgian midfielder, but Fellaini launched an elbow under the chin of Huth, although neither player was punished.

After the game, Van Gaal defended Fellaini in his post-match interview.

“It was a very difficult match for the referee – when you see what Huth is doing with Fellaini, is that not a penalty?” Van Gaal asked, before pulling Geoff Shreeves’ hair.

“Shall I grab you by your hair? What is your reaction when I grab your hair? Your hair is shorter than Fellaini but when I do that, what are you doing then? It’s a reaction.

“Every human being who is grabbed by the hair, only with sex masochism, then it is allowed but not in other situations. They did it. They did it several times I think.”

Van Gaal also felt that former United right-back Danny Simpson should have been sent off in the first half at Old Trafford. Jesse Lingard had raced through the heart of the Leicester defence, only for Simpson, the last man, to come across before the winger fell to the ground. No free-kick was awarded.

“It could have [been a red card for Simpson] because he was Danny Simpson and he was the last man, but it was not a heavy foul so I can understand why he didn’t give it.”

After the game, Simpson added: “I was worried at the time, I’m not gonna lie.”