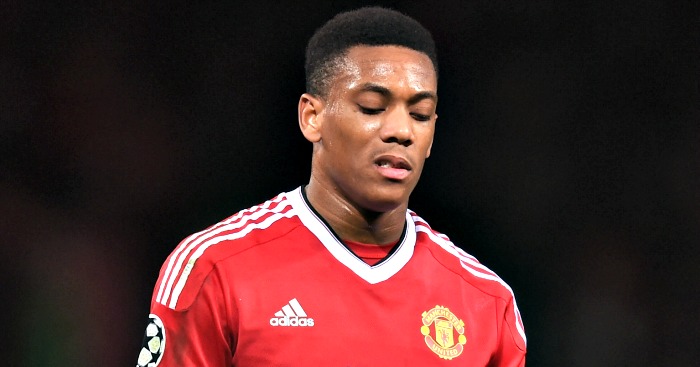 Louis van Gaal believes Anthony Martial will return to goalscoring form soon, but has asked for time with regards to the Frenchman.

Manchester United are likely to crash out of the Champions League group stages for just the fourth time in history if their patched-up team fails to win in Wolfsburg on Tuesday.

If they draw or lose, United will have to rely on PSV Eindhoven slipping up at home to CSKA Moscow – who have already been eliminated – to make it through to the last 16.

It is a situation neither Van Gaal nor the United board thought they would be in when the groups were drawn in August.

And the United boss concedes dropping into the Europa League would be a big blow for the three-time European champions.

“It’s very important for the club to continue in the Champions League, and also for the players,” Van Gaal said.

“They want to show their qualities at the highest podium. That’s why it’s important (we qualify).”

Despite having a rich European history and a multi-million pound squad, the odds seem to be stacked against United.

Wolfsburg only need a draw to make the knock-out stages for the first time and until Saturday’s loss to Borussia Dortmund they had embarked on a 29-match unbeaten home run in the Bundesliga.

A quick look at the Bayern team that day shows just how big of an achievement that was. Arjen Robben, Robert Lewandowski, Thomas Muller, Xabi Alonso and Manuel Neuer were in the starting XI and Mario Gotze, who would go on to score the winning goal in the World Cup final six months later, was only good enough for a place on the bench.

Martial will bear the responsibility of ending United’s woeful record in front of goal despite scoring just once in his last 13 matches.

“He is very talented but he is just 20 years old,” Van Gaal said of the forward, who scored four goals in his first four matches following a £36million transfer from Monaco in September.

“We have to give him time and that’s always difficult when you are playing for a team like Manchester United because the expectations are very high.

“But I am very convinced that he will continue with his performances, and that he shall score at the right moment again.

“You cannot expect of a 20-year-old player coming to the Premier League that he scores every week.

“I didn’t expect it either. When he came he was accelerating in the start of his campaign at Manchester United. I know that and I have to explain it to everybody because he doesn’t need that pressure to score every match.”

Martial will have to deal with that pressure on Tuesday.

He is the only recognised striker in a squad that contains Nick Powell, who has only played one game for United in the last three years, Sean Goss, who is yet to make his debut, and 18-year-old defender Cameron Borthwick-Jackson.

Guillermo Varela made his debut in the 0-0 draw against West Ham on Saturday but could be thrown into the starting XI on Tuesday.

United were booed off following their sixth goalless draw of the season on Saturday, but Van Gaal hopes he will not have to rely on CSKA pulling off a shock win over PSV to qualify on Tuesday.

“We have to be independent of the result of PSV Eindhoven so it’s important we win,” he said.

“I have the experience as a manager that the goals shall come.

“When you are creating chances at the end you shall finish those kind of chances.

“That’s why we have that belief. It’s a matter of time and I hope we can prove it tomorrow.”