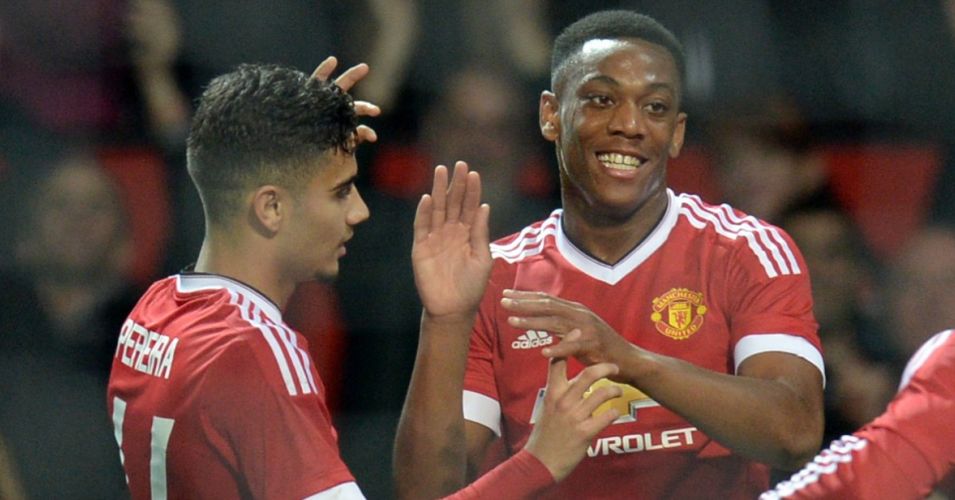 Louis van Gaal was full of praise for youngsters Andreas Pereira and Anthony Martial after Manchester United progressed to the Capital One Cup fourth round.

Alongside captain Wayne Rooney, both were on the scoresheet against Championship Ipswich as Manchester United booked a fourth-round clash with another second-flight opponent in Middlesbrough.

Pereira was particularly impressive at Old Trafford, and fired in a free-kick on the hour mark to cap his first Red Devils start.

“He had a big participation on the game because he scored the free-kick in a fantastic way,” said van Gaal.

“We know that, he’s doing that in training, so that’s the reason he takes the free-kick

“But, like all the other players, there is a lot of space of improvement for Andreas.

“He can play all these positions and his competitors are Young, Memphis Depay, Fellaini, Mata, Herrera, Rooney [and] Lingard, because he can also play at [No.] 7, 10 and 11,” added the Dutchman.

“That is the reason I keep these players because then I don’t have to keep so many [other] players because I have multifunctional players in Lingard and Pereira. I put always the best player in the lineup when he is working for the team.”

Van Gaal also reserved praise for Martial, who scored his fourth goal in four appearances for the club since joining from Monaco for £36.7million in the summer. Van Gaal says the Frenchman will not get carried away despite his excellent start to life in England.

“That’s not difficult because he’s a player who is very modest and he knows he can score because of his fellow players.

“We made it very easy for him two times because we won the game and then the gaps are existing and, with his speed and composure, he can score.

“He did it also against Liverpool and now again. We are happy but still we have to keep our feet on the ground.

“The result was great, we don’t have injuries from tonight and I have rotated players, so I am a happy coach.”