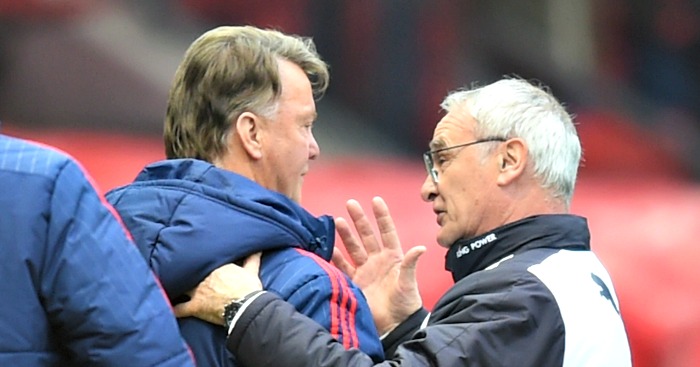 That pesky Old Trafford fax machine really does need sorting. First, it scuppered David de Gea’s protracted move to Real Madrid in the summer, with the Spanish club angered by documentation purportedly being sent beyond the transfer deadline. Nine months later, it was the script which Manchester United did not receive in time.

Leicester were the senders, and their wait for an unfathomable Premier League title must go on. It could end on Monday; it may be confirmed next weekend; it might not even be decided until the final fixture of the season. But while the Foxes will be disappointed by their 1-1 draw against Manchester United on Sunday, they are one step closer to winning England’s top flight.

For some, it seemed a formality that Leicester would be crowned champions on Sunday. The build-up to the game resembled a coronation of sorts, with news reporters travelling to the Midlands to interview hordes of baying fans crowded in the city centre or the King Power Stadium and the surrounding area. Each time, ‘Jamie Vardy is having a party’ provided the background music.

The ‘fairytale’ had even captured the imaginations of those in America; the Washington Post reveled in ‘The Leicester City dream’ earlier this week.

Many knew better. Claudio Ranieri preached caution, pundits warned of nerves, and bookmakers produced odds of more than 3-1 on Leicester beating United. Of course, the same bookmakers offered 5,000-1 on the Foxes being in this position back in the summer. It still seems surreal that Leicester now need two points from their final two games to win the Premier League.

Just as Tony Pulis was perfectly cast as chief party pooper against Tottenham on Monday, few could have played the villainous role against the Leicester ‘fairytale’ more effectively than Louis van Gaal. The Dutchman refused to be carried away by the wave of support for his opponents.

“We cannot allow that they are the champions this weekend at Old Trafford,” said Van Gaal earlier this week. “I think they shall be the champions a week later. We don’t spoil the party, only postpone it a little bit.”

Before Sunday’s game, Leicester were the only side to win more points at home in the league this season than United. Van Gaal’s side had conceded seven goals in 17 home games, and had been beaten only twice at Old Trafford. A draw leaves United in fifth, with Champions League qualification now looking a more distant possibility. But something altogether more important inspired them to at least temporarily prevent the Leicester juggernaut: Pride.

It will have hurt Van Gaal and Manchester United that they had become an afterthought in the final home game of their season. The club have fallen to depths they thought unimaginable after Alex Ferguson’s retirement, but what semblance of dignity remains pushed them – pushed Van Gaal – to a creditable draw against the league leaders. Arsenal remain the only visiting team to be crowned champions at Old Trafford.

For United, this game represented another step towards acceptable improvement. The hosts registered 21 shots, and will derive yet more delight from the season goalscorer Anthony Martial has enjoyed. Wayne Rooney was once more impressive in a midfield role – although whether that will remain a solution in the future is still uncertain. United boasted more than 70% of the possession, but this was not indicative of the game-starving control championed by Van Gaal earlier in the season. Against the most effective counter-attacking unit in the country, United relished taking the initiative.

The pattern continues for the Dutchman: more stories of Jose Mourinho replacing him in the summer equal better results for the current boss. This is not the first occasion during which United have relieved the pressure on their beleaguered manager with a positive performance and result. A winless December, including elimination from the Champions League group stages, was followed by four wins and draw in six January fixtures. Back-to-back defeats at Sunderland and FC Midtjylland came in February, but the pressure was relieved by four consecutive victories across three competitions. A Europa League exit proved to be the springboard for a Manchester derby victory and progress in the FA Cup. The insipid 3-0 loss at Tottenham in April was forgotten after four straight victories.

They could have put even more of a dampener on the Leicester celebrations. With ten minutes remaining, Danny Drinkwater felled the bright Memphis Depay. The former United midfielder was dismissed by Michael Oliver for a second bookable offence, but the foul occurred inside the area. Foxes fans will rightfully point to the lack of a decision received by Riyad Mahrez after Marcos Rojo clumsily stopped the Player of the Year in his tracks in the first half in response.

And so to Stamford Bridge, the stadium which provided the backdrop for the crowning moment of last season’s Premier League champions. An Eden Hazard goal handed Chelsea the title on home turf on May 3 against Crystal Palace last year. Almost 12 remarkable months to the day, Tottenham must defeat their London rivals to stand any chance of winning the league.

On reflection, perhaps Leicester will prefer to have drawn against United. If Tottenham pass their Chelsea test, the Foxes are provided with the opportunity to win the Premier League at the King Power Stadium, in front of their home fans, against Everton next Saturday. It would be a more fitting conclusion to a bizarre but brilliant campaign. They will know it is not over yet.