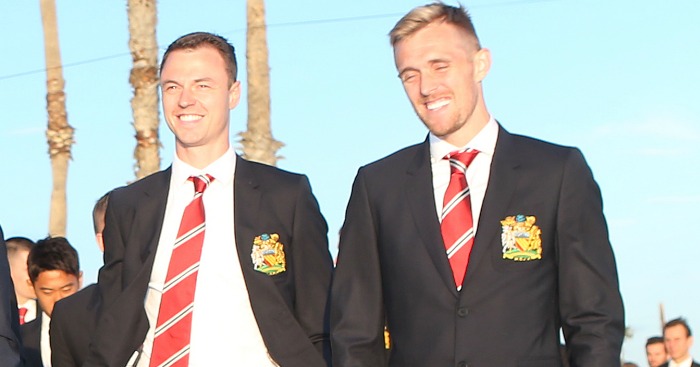 It is just over a year since the 32-year-old midfielder ended his long association with United to start a new challenge at the Hawthorns.

Fletcher made 342 appearances after joining the Reds as a trainee in 2000 but moved on last February after failing to become a regular under Van Gaal – a route to the West Midlands followed by fellow academy graduate Jonny Evans in the summer.

Both have swiftly settled into life at the Hawthorns at a time when their former club could have done with their experience, nous and quality.

United have been forced to blood youngsters to patch up their injury-hit side, but Van Gaal appears happy with the situation that his team and former players find themselves in.

“Jonny is a big loss for every team,” Van Gaal told MUTV. “I’m very sorry that he cannot play (on Sunday due to a hamstring injury).

“I’d like to see him again and I’ll also see my ex-captain Darren Fletcher.

“I’m happy that Darren is playing so often, because that was our aim also when we spoke about his departure.

“It’s not always easy to say things to the players about it being better for them to go, but when you see players like Jonny and Darren playing so regularly, it’s good for players. I’m very happy for them.”

Fletcher’s exit and a string of injuries have seen the average age of United’s starting line-up brought down dramatically.

Juan Mata was the Reds’ oldest player against Watford on Wednesday and the 27-year-old stand-in captain led by example, with his late free-kick securing a fourth straight victory.

“It was not difficult,” Van Gaal said of giving the Spaniard the armband in the 1-0 win.

“I have an elder group of players with whom I’m talking about aspects of things – training sessions, meetings or how we have to approach players and so on.

“Juan is a member of that group with the three captains – (Wayne) Rooney, (Michael) Carrick and (Chris) Smalling – and (Bastian) Schweinsteiger as well, so it was an easy choice for me.”

Carrick is likely to return against West Brom having been rested in midweek, while Van Gaal is hoping to have Smalling back from a shoulder complaint.

Phil Jones, Antonio Valencia and Marouane Fellaini may also be involved in the squad to face a West Brom side that the United boss is wary of.

“We should be more confident, but it’s always dependable on results,” he said.

“Of course, the atmosphere has been raised so it is better, but every opponent in the Premier League is difficult to beat and we have to beat West Bromwich Albion.

“We’re still points behind (the top three teams) and we have to close that gap.

“We have to be patient but we also need to move the ball more quickly.

“When you do that, you create more chances. We have to improve that against opponents like West Brom, because that is the only way you can score.”