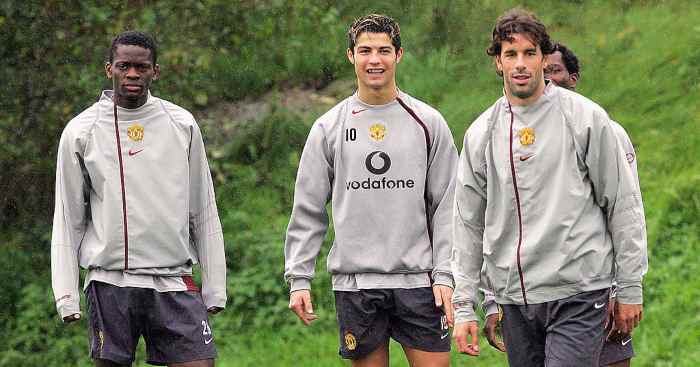 Van Nistelrooy had an unbelievable record of 150 goals for the Red Devils in 219 appearances for the club before leaving for Real Madrid in 2006.

There were rumours that Saha’s appearance in the League Cup final ahead of Van Nistelrooy was the final straw as the Dutchman left United for Spain but the former France international says the pair had a good relationship.

Saha told FourFourTwo: “He was always really nice with me; he maybe had a problem with the choice made by the manager, but never with me. He was obsessed about goals, and I respect that.

“I know some people said I maybe pushed him to a move away from the club, but that’s totally bollocks. He was such a good player – he just had an issue with the manager – and I was maybe good enough for the manager to replace him, but I could have played with him, too.”

And in the same interview in the new issue of FourFourTwo, Saha has claimed that Van Nistelrooy made Ronaldo cry in training at United.

“Ruud had that kind of ego: he wanted all the passes,” Saha added. “And sometimes, for the development of Cristiano Ronaldo and Wayne Rooney, it was difficult for the manager to deal with.

“Did Ruud make Ronaldo cry? Yeah, there were stories because I think they ended up in an argument at the moment when Cristiano’s father had passed away, so it wasn’t the right moment. Things like that happen when two players have lots of spirit, but I’m sure Ruud regrets some of his words.

“Cristiano was just an animal. I don’t know if you can say that he was a human! You could see from when he was 18 or 19 that this guy was not normal.

“These players who have all the ability recognise that it’s also about working harder than anyone – not just talent. The top seeds in tennis don’t hit the ball better or have better technique; no, they work harder than anyone, and Cristiano did that.”