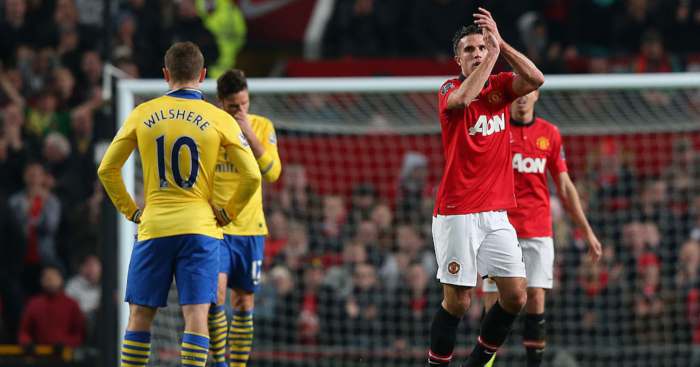 Robin van Persie says he is “sorry” if he “hurt” any Arsenal supporters by leaving to join Manchester United.

The Dutchman made the move to Old Trafford for a reported £22.5million in 2012 after scoring 132 goals for the Gunners over a period of eight years at the club.

“At crucial moments you have to make tough decisions,” van Persie told the BBC. “It was a very tough decision and I get that fans were angry as I was the captain and top scorer.

“Sometimes you feel like you need a challenge and new adventure. If I hurt people I’m sorry. I made that decision and I stand by it.”

"If I hurt people I'm sorry" – Robin van Persie opens up @BBCNews on his 2012 move from Arsenal to Man Utd, Wenger, Ferguson, Solskjaer and the "fantastic road trip" that was his 18-year career. More @5liveSport Football Daily podcast and @BBCSport website from 10.30pm #AFC #MUFC pic.twitter.com/Dk4v2BDoCe

Van Persie worked under two of the greats of English football management in Arsene Wenger and Sir Alex Ferguson and he was asked his thoughts on the duo.

“Me and Arsene Wenger never had an argument or a big fight,” Van Persie added. “Sometimes on certain levels we had different ideas.

“He was one of the big reasons why I signed. Sir Alex really pushed the guys to pass the ball to me and if it goes in in the crucial games and crucial moments then after a few months everyone at the club had the feeling it was going to be our year.”