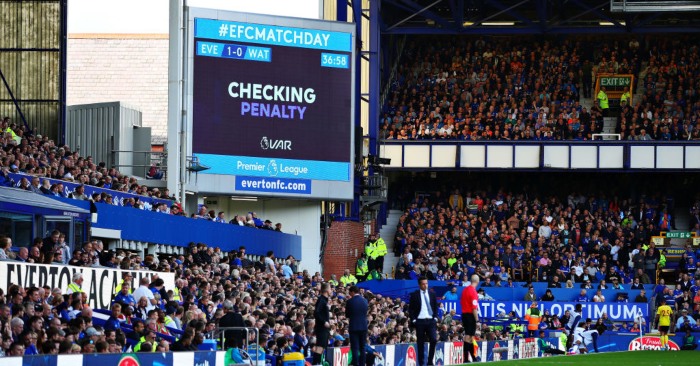 After another weekend where the dreaded three letters of doom became the centre of focus once more and sent fans scuttling into their armed camps to fire shots at each other, what interests me is what this rather tiring debate about VAR has revealed about ourselves.

At one extreme you have those like me who have known from the moment this was proposed years ago that it didn’t square with our desire for football and indeed anything else, to be an expression of our albeit flawed humanity. We are not troubled by lack of perfection at all. In fact, I can draw a direct line between how I see football, music, literature, art and even politics. We implicitly understand that the struggle for – but failure to achieve – perfection is where the soul of existence lives. This is often the anti-establishment position, the standpoint of the ornery, the rebel, the cynic and those who instinctively raise an eyebrow at people who prefer a straight line to a meandering one.

Call it the spirit of ‘close enough for rock ‘n’ roll’ if you like. When I hear Jimi Hendrix wrestling the Star Spangled Banner from wailing feedback anarchy, it makes my skin prickle with an endorphin rush in the same way as, to pick just one example, Marco Tardelli’s goal for Italy v West Germany in 1982’s World Cup. The reins of reason and logic which anchor us to life are momentarily let slip. For a second there is madness, there is freedom and once again, we are infinite in the universal mind. But I understand to others it is just meaningless noise.

I get this same freedom from Diane di Prima’s poetry, reading the Electric Kool-Aid Acid Test or standing in front of a huge Mark Rothko. These seem to be expressions of the same unfathomable unknowableness of being human, the process and journey being everything.

So when those of us whose hearts and minds are moulded in this way are told that VAR exists to reduce or outlaw human error, we bridle against it as anti-human, as anti-soul, as lashing us more tightly to the bars of the prison of hard logic and practicality, no longer able to slip our moorings and be momentarily free. It denies us the soaring moment of infinite release knowing that further scrutiny is forever active and so the thrill of the now has been extinguished.

That’s why it feels oppressive. It’s why we are innately opposed to it. It’s why I can’t accept that Tardelli moment should be technologically paused or interfered with while it’s approved from far, far away. It goes against everything I want out of football, sport and existence.

But oranges are not the only fruit and VAR perfectly reveals this to us. To many, errors, mistakes and imperfections are annoying and troublesome to their mentality. They do not want the vague or imprecise in their lives. They want accuracy. They want things to be neat and tidy and for everything to have its place. They want to get things right, damn it and can’t understand why this does not trouble others. They will say “rules are rules” and that’s how they like it.

They might prefer realism to impressionism, maths over poetry, fact over fiction. For this mindset, getting decisions in football correct down to the last millimetre is where they find their pleasure and understanding of existence, feeling that only facts can reveal truth and in football only the technology can align reality to the rules. So when people like me suggest this goes against how we feel, they are understandably defensive because it is, in effect, a critique of who they are in the same way their sneering at my creed is of me.

Others strike more balanced positions, are more simple souls, less concerned by either of these extremes and who will happily go with whatever flow is flowing. Flexible, adaptable people whose route through life tends towards the path of least resistance. Happy to go along with those who feel more strongly, rarely wanting to make waves or be tied to a hard and fast position. So VAR isn’t that big a deal for them, they can take it or leave it and wish those at either end of the debate would just stop flapping their gums about it.

This is why there will simply never be any resolving the VAR angst. Those who say we’ll get used to it eventually, or that it will improve and more people will see its worth have not understood what is really going on here. Whatever position we hold, we hold that as a life principle, whether we are conscious of it or not. In a real sense, VAR helps reveal who we are. It finds different articulations in different circumstances, but our opinions, feelings and biases tend to remain constant, so to try and change anyone’s mind on VAR or anything else, is to ask them to change who they are. While that is not impossible and change is ongoing, it isn’t something which can be argued into being by one side to another. It is like trying to tell someone not to like music, or not to be in love; it’s all too deep.

We’re never going to find some peace in the VAR debate – and lord knows we need some peace from it – unless we accept that no matter how much any of us jump up and down and scream that we are right and others are wrong and they should bloody well realise they’re wrong, these will all be wasted words because we are demanding people change their nature, and while that might not be impossible, it isn’t going to happen in isolation, it will require a volte-face on how they approach life in general. And that’s a very, very big deal for anyone to undertake.

So can we agree to stop beating each other up about VAR, continue to hold our positions but understand that how we all feel about it is simply an expression of our character and should be respected as such?

Okay, carry on with the exhausting, wearying and totally pointless shouting then.