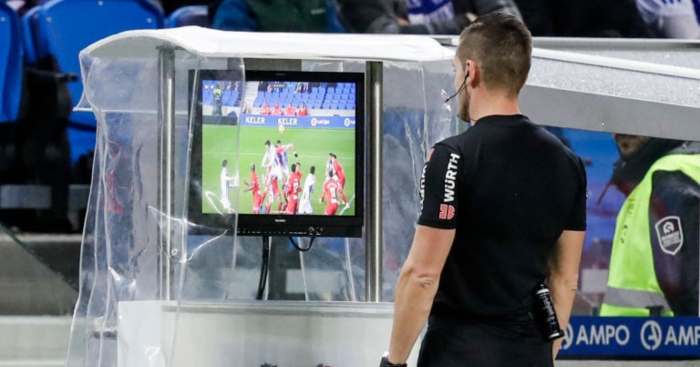 For decades the topic of refereeing integrity has been at the forefront of the Spanish footballing conversion. From accusations of pro-Real Madrid bias in the Franco era to alleged bribery and corruption in modern times, fans of most clubs (Real and Barcelona in particular) felt they were getting unfair treatment from the officials.

At the start of this season, VAR was introduced to La Liga in the hope that the laws could be applied more accurately and therefore fairly, with greater consistency and transparency. Using video technology would reduce cheating, improve the standard of refereeing and presumably decrease grumbles from clubs, managers and fans.

If anything, though, it has just given them even more to grumble about.

There have been a number of VAR-related controversies in its inaugural half-season, none more so than in the last week and a half.

In Real Madrid’s 2-0 home defeat to Real Sociedad on January 6, it looked like Los Blancos should have had a penalty when Vinícius was brought down by La Real keeper Gero Rulli. The referee thought he had got the ball, and VAR didn’t intervene, so no penalty was awarded.

It hasn’t just been Real Madrid; Getafe, Real Valladolid and Levante have all spoken out about VAR either not being used or being applied incorrectly in recent weeks. But Madrid shout the loudest and get the most press coverage, and their continuing indignation even made the front page of Marca on Wednesday, a full ten days after the event.

Amid all of the noise, the head of the Spanish FA’s refereeing technical committee Carlos Velasco Carballo held a news conference on Tuesday to discuss the progress of VAR since its integration. The timing of the meeting seemed suspect given the recent controversies, but Velasco insisted it was planned in advance.

His statement was surprisingly candid, recognising that there were still problems with the system that needed ironing out, but he was largely positive about the impact of the new system.

He admitted that seven erroneously awarded penalties had not been corrected by VAR, and that five players had avoided red cards when they should have been sent off, but noted that the vast majority of penalty-related errors were overturned, reducing the margin of error to 4.79%.

There is every chance that the teething problems with the system can be resolved over time, just as the initially inadequate Decision Review System in cricket has evolved into a pretty effective tool, but Velasco’s objective of “zero errors” will never be attainable.

VAR still relies on human interpretation, and even with the benefit of multiple television angles it is still possible to arrive at the wrong decision, or even at a decision which looks right to you but may look wrong to another referee.

Consistent application of the rules will continue to be a problem, just as it is for on-field referees, and so however good the system is at reducing errors, there will still be bones of contention and accusations of unfairness.

So has VAR improved Spanish football? Well, as Velasco pointed out, statistically there has been progress in terms of correct decisions and errors overturned, but that is not the only yardstick by which it should be judged.

The delays to the game and in-stadium confusion are a turn-off for fans, and the system has been somewhat undermined by a lack of overall faith from fans and clubs.

There have been moments where the use of VAR has killed moments of unbridled joy as well. Back in August, newly-promoted Valladolid thought they had equalised against champions Barcelona in injury time. Goalscorer Keko celebrated wildly, only for the goal to be disallowed for a very marginal offside call that the linesman felt was level. The technically correct decision was arrived at, yet one couldn’t help but feel that VAR’s unfeeling rigidity had stamped on one of the game’s magic moments.

Velasco insisted in his press conference that “the essence of football has not been damaged,” but in many small ways it has. There will always be mistakes as long as human intervention is required, and as much as we all want fairness and consistent application of the rules, we all accept that errors are part of the rich fabric of the game.

Should the soul of the game be sacrificed in the quest for refereeing perfection? As Gerard Piqué said, “when there was no VAR there was controversy because there was no VAR. Now there is, there is controversy because there is.” In short, it will remain impossible to fully satisfy all parties, and mistakes will never be completely eliminated. So if that is the case, then surely we’re not much better off than before we had VAR?

If greater confusion, disruption and complication is the price of a few more correct decisions, then surely it is not a price worth paying. For the few problems it has solved, VAR has created far more. Was anyone really so unsatisfied with the game that they want to see it homogenised in this way? It may not have been perfect, but that’s a big part of why we love it.