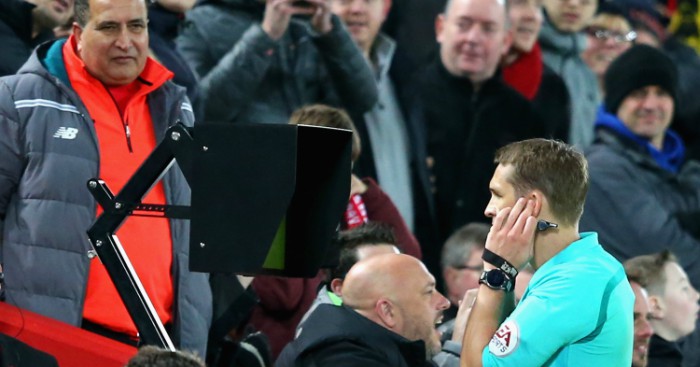 Some people have been telling me why VAR is a great and progressive development while others are telling me why it will ruin football. Across Europe, where it’s been trialled for some time now, opinion is equally divided. To some it feels like an abuse of everything they love about the game, to others it feels like it’s improving things markedly and righting previous wrongs. The gulf between pro and anti seems huge. But why should that be? How can it be so very divisive?

I’ve come to the conclusion that it’s because it represents two very different and opposing ways of viewing football, sport and maybe even life itself.

As you know, I am firmly against the VAR. Fundamentally, this isn’t because of how it works, or what the referees can or can’t do, or what they do or don’t use it for. And I’m not interested in how well or badly it works, really. That’s not the point. My position is that I’m philosophically, spiritually and intellectually against the very idea of making decisions other than with the naked eye and in the moment in any sport.

I know the use of VAR is simply to get more decisions right. I can understand that point of view perfectly. Getting things right has got to be a good thing, right? My reply is simple.

I’m happy to accept the existence of mistakes and I always have been, whether they favoured the Boro or they didn’t. To be honest, I’ve almost never known if a referee’s decision was right or wrong when I’ve been in the stadium in 48 years, and I don’t think I’m alone in that. Usually, we’re too far away and in the wrong position to make any even-handed call. Ref outrage isn’t something I’ve really indulged in.

But I’ve seen this viewpoint absolutely infuriate people. “Why would you not want more correct calls?” they ask, fulminating at my ornery standpoint.

It’s obvious to me. Football is an organically unfolding one-shot deal, both for players and officials. You don’t get a second go at anything. You try and get everything right, but know you might not. That’s the jeopardy at the core of the game. You get a single shot at getting it right, be it a shot at goal, a save or calling a penalty. It is the brilliant essence of football, indeed of any sport. The spontaneity and the drama is dependent on a mixture of brilliance and inadequacy, on getting things right and wrong. The moment is all. That’s the sort of human I am. And I know I’m not alone.

Yet I do understand the mindset that wants more correct calls at all costs. People like things to be neat and tidy, with everything in its place. They like binary choices. Right. Wrong. I almost admire that principle, but it’s not how many of us are constructed. For some of us, the need to rationalise a sport in order to get its decisions right is a straitjacket which squeezes out romance and is a dilution of the game’s innate humanity. It’s only happening because too many cannot accept officials making mistakes as part of the human condition; fans, managers and players have berated referees for so long that they have driven them into the arms of a technological saviour.

To me, football is a complex metaphysical thing with an infinite number of unknowables. That’s why I’ve always said it is chaos. I love the chaos but maybe chaos scares some people. If you want everything ordered and in its place then VAR plays well to that mindset. The desire to see the correct calls made is the desire to make order out of the chaos. But to those of us who feel the chaos is actually the whole point, this sounds oppressive and against everything we hold dear.

And this is precisely why the two opposing sides will never ever agree and why both feel so strongly. And it is why no argument either side proffers will change anyone’s mind. It’s why the words of the implacably ‘against’ sound so obviously wrong to the enthusiastically ‘in favour’ and vice versa.

To further illustrate these different mindsets – I used to know a lad whose greatest compliment when he went to a gig was to say it was the music was “exactly like the record”.

But that’s the last thing I’d want. I want it to be wild and teetering on the edge of falling apart. That is the same sort of philosophical split.

Just like VAR, neither view is innately right or wrong. What one observer loves is what kills the joy of another, but both sides feel so strongly because it is an expression of their own nature.

We need to respect each side of the debate and realise that we’re just different sorts of people who see the nature of things differently. But I would hope that those pro-VAR fans can see why we feel that it is is tearing a hole in the fabric of a game which everyone loved for 160 years without VAR and respect that, just as we should respect why making more correct decisions seems so important to them.

But equally, let’s be under no doubt that we have arrived at the cutting edge of a battle for the soul of football, the outcome of which will profoundly shape the future of the game and will profoundly divide fans, managers and players, forever. The Premier League should bear in mind that VAR will only apply to the Premier League and if people hate it, they can run into the arms of every other league for their football fix.

VAR is a knife about to cut a deep, life-threatening wound into the Premier League body right now, and even if it survives, which is by no means certain, it will leave a permanent scar and football will never be the same again.