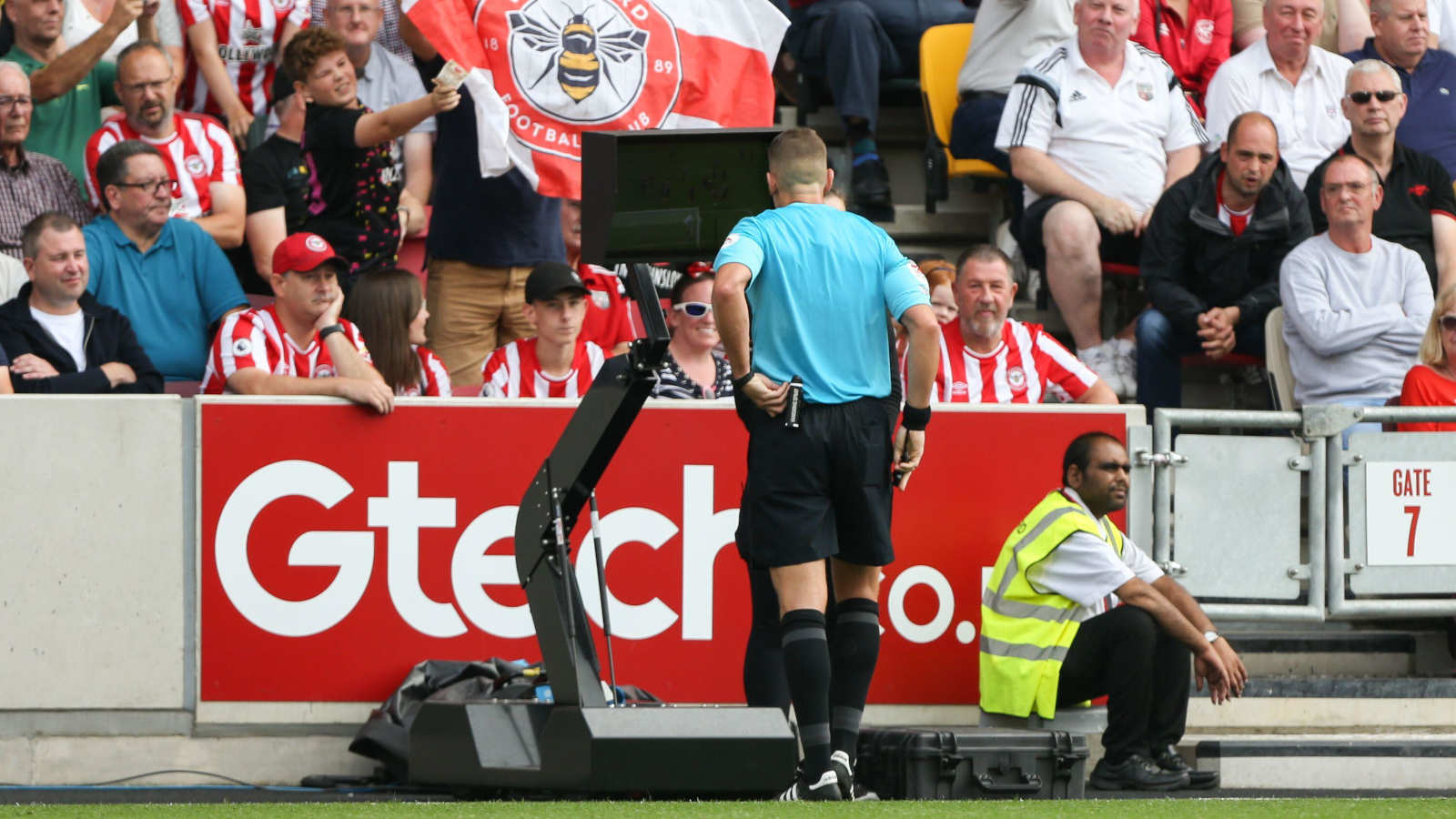 At some point football decided it was too important to be flawed and that’s unlikely to change any time soon; VAR will not be scrapped.

It doesn’t seem as though the din is going to go away. Complaints about VAR and the standard of refereeing are going to be the soundtrack to the 2022/23 Premier League season, as the game itself hurtles towards a point at which it starts to become ungovernable.

It’s push and pull between various vested interests, from philosophical standpoints on what football should essentially be, to a culture that allows – and to some extent often seems to encourage – increasingly swivel-eyed reactions to incidents that take place during what is supposed to be a game.

Since the start of this season, refereeing decisions have been under the microscope like never before. Social media is aflame with allegations of corruption and bias – there is, of course, seldom any evidence for this somewhat loaded language beyond the actual decisions themselves – and that the game is being refereed at a level of incompetence never seen before.

Well, that’s kind of hard to prove or disprove. Referees have always made mistakes and fans have always been unhappy with these mistakes. Whether there were more in the distant past is difficult to quantify, but what we can say for certain is that blaming them has been central to the attitude of many in the game and, it might well be argued, the game itself since its very beginnings.

But ‘the referee’s decision is final’ isn’t a phrase that you hear much these days, and that’s almost certainly because it isn’t. Forty years ago, most matches were not televised, so while the mistakes that took place on the TV were amplified – you say the name ‘Ray Tinkler’ to fans of all clubs over a certain age and they’ll know instinctively who you mean – most weren’t seen by anyone beside the few thousand inside the ground itself.

And over those intervening four decades, football’s surveillance culture has grown and grown. First, matches started to be shown live. Then, all matches were recorded and the goals broadcast. Match of the Day, which began in 1964 with 45 minutes of highlights of one match, now features all Saturday’s Premier League matches shown over the course of 90 minutes.

Highlights of matches have become shorter. There is more football, but appetites have become more bite-sized. Incidents matter now, rather than the ebb and flow of the game itself. Broadcasters benefit from virality on social media when their pundits say something ‘outrageous’, whether it’s insightful or just likely to raise some hackles.

The game seems to be arriving on the standard of refereeing as being its biggest issue. Well, that in itself is obviously debatable, but let’s work to the assumption that it is. Why might that be? After all, such claims are nothing new. For many years, it was assumed that the fact that referees were amateurs was the reason. Professionalise them, and standards will increase. It doesn’t appear that this worked.

The pace of the game has certainly increased over time, but there’s little but conjecture to suggest that referees haven’t kept up. Referees have got younger, and have regular tests of their fitness. They do still tend towards being older than players, but that shouldn’t affect their own mobility around a pitch. It’s been known for some time that the job of the assistant referee is essentially impossible, but that was overlooked for decades.

The available pool of referees is shrinking. Thousands upon thousands are quitting each year. The culture of abuse, and the culture of a tolerance of abuse, has already had a tangible effect on youth and grassroots football. The question should be an obvious one: considering all that scrutiny and abuse thrown their way, well, would you be a referee?

And VAR has not quelled the levels of controversy surrounding refereeing decisions. That much is very evident indeed. If anything, the focus has only intensified. This season, it has felt as though close to every match is under a cloud of some decision or other which should have been given the other way, or not at all.

Because on the other side of that bank of screens is just another group of flawed and fallible human beings. But dragging them out to explain themselves after matches doesn’t seem likely to make a difference. either. Those demanding this sort of thing often only seem one step short of saying they should be put in the stocks.

What’s gone wrong is that football hit a point at which it decided that it was too important to start getting decisions wrong. But rather than looking at why this might be and whether these extremes – one match, for example, being worth a minimum of £135m, as the Championship play-off final is – could be tempered, football decided to try to eliminate getting decisions wrong during matches instead.

The introduction of VAR was a central part of that culture, and it was a fundamental shift in the nature of games at this level. Since its codification more than 150 years ago, football has been beneficiary of simple rules with room for interpretation, and that requires a certain degree of deference to authority, even if only for 90 minutes.

And it does feel as though the game is only really reflecting society in a broader sense in this respect, with everybody in their bunkers lobbing verbal grenades at each other, convinced that we’re right and everybody else is wrong, rewarding the most ‘outrageous’ opinions with the dopamine hit of attention, and leaving the very nuance that had served football so well throughout the whole of its existence behind.

Offside rules, which had been relaxed for years to benefit attacking players, have started to be tightened again. We live in an age of protractors, angles and lines being drawn across the pitch. The ongoing quest for perfect objectivity has reduced the game to margins of millimetres. ‘Well it’s either offside or it isn’t’, has become a common refrain.

So, what are the answers? Well, the game’s governing bodies have gone too far down the wormhole of VAR that it seems difficult to imagine them rowing back, and requests for ‘respect’ are met with increasingly cynical sneering. Indeed, if anything it’s easier to imagine a world in which officiation of games is completely automated, at which point there would likely be considerable anguish from those whose caterwauling had made this eventuality inevitable in the first place.

VAR is another step in that process, on top of goal-line technology, and UEFA has now started trialling automated offside in the Champions League. How long might it be before sensors are being used to apply the same uniformity to handball, fouls, or both?

And, of course, no-one will want this, because the argument is never really about ‘consistency’ or ‘getting the  big calls right’. What it’s really about is that we, as fans, want every decision to go our way. It is seldom to never that you hear of fans complaining about unfair or unjust decisions given against their rivals.

Perhaps it’s built into the ego of organisations like the Premier League, UEFA, or FIFA to assume that they could cure the game of all its grey areas, once and for all. There was a time when those bodies could have stood up for football’s grey areas, but instead they went for dividing everything into black and white. And look where we all are now.

The media has a responsibility here, too. It should be incumbent on broadcasters that their pundits understand the laws of the game fully, as well as how they’re currently be interpreted. We who write or otherwise talk about the game have a duty to understand what we’re talking about. And those with reach should understand that their words can have an impact. The rush towards hyperbole needs to stop.

Should VAR be abandoned? Well, few seem to believe that it’s working, and there remains a sizable proportion for whom it’s a fundamental tinkering with the game too far. But it seems vanishingly unlikely that it will be dropped by the Premier League while other leagues worldwide, federations and confederations, continue to use it. The Premier League dropping VAR would be, if nothing else, politically ill-advised. And its use is spreading, not contracting.

That doesn’t mean that there hasn’t already been significant overreach in terms of how it’s used, that it hasn’t come to undermine the authority of referees on the pitch, and that it isn’t an even worse experience for match-going supporters than those watching on the television. If it can’t be packed up and switched off, then its use should be scaled back to match the promises that were initially made about how little it would disrupt the flow of games.

But what really needs to change is that football – and, in a broader sense, society – needs a head-shift in many of its attitudes. A little less contempt would be a start, as would a little recognition that other perspectives other than those which personally benefit us are available.

Managers need to stop using referees as human shields and the media needs to stop indulging them when they do. The Premier League needs to stop issuing these edicts ‘interpreting’ the laws of the games in ways that seems to change in accordance with the direction of the breeze. There needs to be more more openness surrounding the Premier League’s decision-making processes. Faith in the system needs to be rekindled. It isn’t going to be easy.

Arrigo Sacchi said that football is ‘the most important of the unimportant things in life’. At present, some people seem to be forgetting the second half of that sentence. And with the current culture of abuse only shrinking the pool of available referees and further falls in standards likely, this is an issue that needs to be address immediately. Because if trust within football erodes completely, the game itself starts to become ungovernable.