Home All The News Vardy: ‘Head and heart said no to Arsenal’

"Deep down if you don't think it is right move for you, you don't do it," he says. 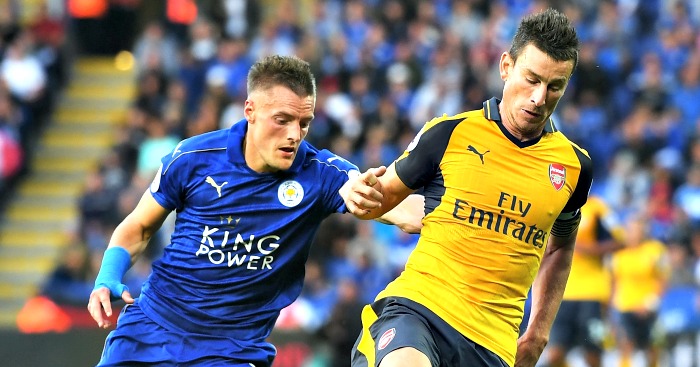 Jamie Vardy has revealed the pain felt by England’s stars at their Euro 2016 humiliation and how he made the tough decision to turn down a move to Arsenal before bumping into Gunners boss Arsene Wenger during the tournament.

Despite winning the Premier League with Leicester, being named footballer of the year by the Football Writers’ Association and getting married, Vardy was also part of the England squad which crashed out of the European Championships to Iceland.

Add to that a high-profile bid from Arsenal, which the forward would go on to snub, and it was an off-season of mixed emotions for the 29-year-old.

Vardy, who will start on the bench for Sam Allardyce’s first game in charge of England in Sunday’s World Cup qualifier in Slovakia, scored as a substitute in the 2-1 win over Wales, the Three Lions’ only win at Euro 2016.

And he admitted elimination to Iceland in the last 16 was tough to stomach, especially after he had ended the club season on such a high.

“It was heartbreaking,” Vardy said of England’s exit, which resulted in boss Roy Hodgson’s departure.

“Every single one of us is a football fan as well. If we weren’t playing we’d have been watching and it was heartbreaking. But we do have to move on and this is a new chapter with a new boss.

“We have to make sure we get the win on Sunday and then take it into the rest of the qualifying campaign and reach the World Cup.”

Away from the games in France, Vardy was left in his hotel room weighing up a move to Arsenal after the Gunners triggered his release clause.

The former non-league star rejected Wenger’s overtures and eventually signed a new deal with Leicester – something he said always felt like the right thing to do.

“I was in a hotel room for many hours of every day with nothing to do,” he said.

“You had a lot of time on your hands. I am not going to beat around the bush – every time I thought about it, and every aspect of it I thought about, both my head and my heart were saying to stay, which is why I made my decision to stay.

“Deep down if you don’t think it is right move for you, you don’t do it. It is as simple as that. You get that much time to think about every single thing down to the tea lady.

“You think about what might happen, what might not, where you could be, where not. Every time I thought about every little thing, both head and heart were saying, ‘You need to stay’.

“In my professional life it was the hardest decision. It was hard but, like I said, when it came to my head and my heart it was an easy decision.”

Vardy’s choice made for some uncomfortable exchanges with Wenger when the pair bumped into one another during Euro 2016.

He said: “To be fair I spoke to him a couple of times in the hotels we were in while we were in France. It was just, ‘Hi, are you all right?’, and walk off to the match.

“It was basically every hotel. I think he was doing French TV for the Euros. It wasn’t awkward, it was just a simple, ‘Hello, are you okay?’. That kind of thing.

“It was a nice compliment they wanted to buy me. But my head and heart were saying stay.”

Vardy opened his account for the season with a goal in Leicester’s win over Swansea on Saturday before linking up with Allardyce’s England for the first time on Monday.

“It has been great, it is early days and there’s a lot of new staff in as well,” Vardy said of the get-together.

Asked if much had changed in his life since his title success and England call-up, Vardy singled out the attention.

“Put it this way – I don’t get to have that many family days. I can’t really go to the shops without getting harassed.

“Obviously it’s fans wanting photos and stuff, but me, personally, if I’ve got my little girl with me then I don’t really want to be putting her down to have a photo taken. I try and explain it in the nicest possible way that this is my only down time I get and my only real quality time with the family.”