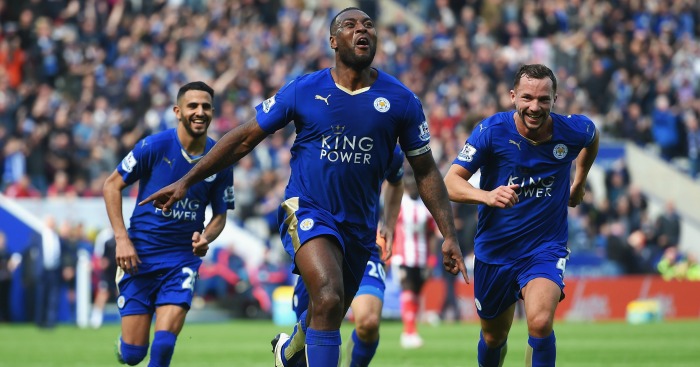 Leicester’s players may have spent the night partying at Jamie Vardy’s house but they still found time to reflect on a stunning Barclays Premier League title triumph.

The Foxes were crowned top-flight champions for the first time in the club’s history after Tottenham were held to a 2-2 draw by Chelsea on an evening of high drama at Stamford Bridge.

Christian Fuchs was also among the guests and the Austria international posted a video on Twitter showing the group celebrating wildly as the title was confirmed.

Robert Huth and plenty of others also shared the moment while around 1,000 Leicester supporters gathered outside the gates of Vardy’s home.

Former Nottingham Forest defender Morgan, though, managed to reflect on a stunning season which has seen the 5,000/1 outsiders upset the odds.

“It’s the best feeling of my career and I couldn’t be prouder that it’s as part of this team,” he said.

“Everyone’s worked so hard for this, nobody believed we could do it, but here we are, Premier League champions and deservedly so.

“I’ve never known a spirit like the one between these boys, we’re like brothers. People saw it last season when everyone expected us to be relegated, but we fought back to prove people wrong. This season’s been a continuation of that. We’ve built on the momentum, but I don’t think anyone believed it would come to this.”

The anointing of Leicester, who are the first new top-flight champions in 38 years, will come after Saturday’s clash against Everton at the King Power Stadium, and Vardy will return from suspension to feature.

The 29-year-old began his senior career at Stocksbridge Park Steels after being rejected by Sheffield Wednesday as a teenager and was playing non-league football for Fleetwood as recently as 2012.

He has gone on to score 24 goals for club and country this season and claimed the Football Writers’ Association player of the year award on Sunday but the title has capped a fairytale campaign.

“It’s an unbelievable feeling,” said Vardy. “I’ve never known anything like it. We were scrapping to stay in the league last season and on Saturday we’ll be lifting the trophy.

“That gives you an idea of how much hard work has gone into this season from every single player and member of staff.

“It’s the biggest achievement in the history of a great club and we all feel privileged to be part of it.

“It’s even more special to have done it with these lads. Every minute of hard work we’ve put in on the training pitch has been worth it for this moment.”

Doubts were raised over whether boss Claudio Ranieri could stave off a battle against relegation when he was appointed as Nigel Pearson’s successor on July 13.

Now, 294 days later, he had the luxury of jetting back home to Rome to have lunch with his 96-year-old mother before returning to the East Midlands a hero.

Ranieri’s whereabouts were unknown during the mayhem, given he said he would be flying back from a Roman lunch date with his 96-year-old mother during the game, only to be seen leaving Italy somewhat earlier.

Leicester lost 19 games in last season’s bid to escape relegation yet, under Ranieri, they have tasted defeat just three times in the Premier League.

They have gone to Manchester City and Tottenham and won, while an unbeaten run since mid-February proved beyond any doubt Ranieri’s side had the nerve to finish the job.

Midfielder Andy King, who has spent his entire career with Leicester, admits the size of the achievement could take some time to sink in.

Seven years ago, to the day, after the Foxes rounded off their League One title-winning campaign with a 3-0 win away at Crewe, they can now savour the proudest moment in the club’s history.

“The story of where this team has come from to get to this point has been all over the world recently and I think the lads deserve great credit for the way they’ve taken it in their stride, stayed focused and kept delivering results – especially with a great side like Spurs chasing us so hard.

“We’ve been so consistent and just determined not to let the opportunity pass us by. We deserve this.”