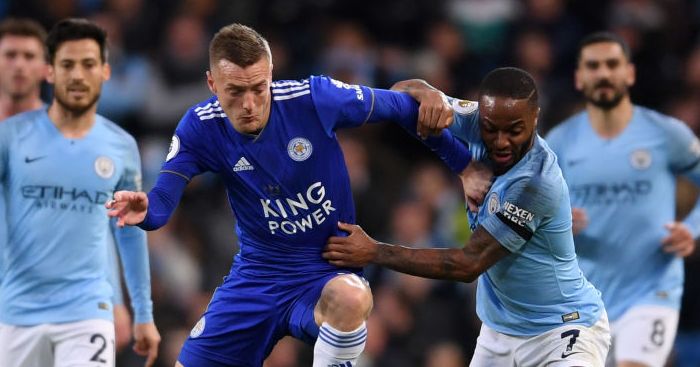 Southampton v Leicester City
Now Jamie Vardy may look like the type of fella who brews his own vinegar, but he has six goals in just nine Premier League appearances so far this season and we fancy him to bag first when the Foxes travel to Southampton. It’s no win in four for Saints, while Leicester are flying.

Manchester City v Aston Villa
“He’s in the top five players in the world now. Definitely! I don’t care who you mention,” said Rio Ferdinand of Raheem Sterling after his awesome quick-fire treble against Atalanta in the week. Sterling is a rare gem and looks a punt at better than 7/2 to score first against a Villa side who will come to have a go this weekend. Can I also say, for the record, I really hope all those folk on Facebook putting up photos of spiders in their houses have a terrible Christmas.

Brighton v Everton
Brighton are no mugs under Graham Potter so I don’t get how they are betting rags here, especially given they are playing at home? And Everton are sh*t?

Watford v Bournemouth
I can’t get on the right side of Bournemouth this season and it’s p*ssing me off. Indeed, I’m getting a bit tired of Eddie Howe. Actually Howe is sound. He’s basically just your cousin who keeps trying to get you to go paint balling.

West Ham v Sheffield United
I’ve got raw corn on the Blades to be relegated this season at 8/11 so am not impressed to see them ninth in the table at this point. To quote the late, great Graham Taylor: “What sort of thing is happening here?”

Burnley v Chelsea
Transfer ban? What transfer ban? Chelsea have won six matches on the spin under Super Frankie Lampard and they should be trusted to make that seven following Saturday’s trip to Turf Moor. Consecutive clean sheets against Ajax and Newcastle don’t hurt either and Chelsea to win to nil looks a shout here.

Newcastle v Wolves
Wolves came from behind to draw at home to Southampton last week and thus extend their unbeaten run in the Premier League to four matches. And one rather fancies Nuno Espirito Santo to outwit Stephen Roger Bruce this weekend. Away win.

Arsenal v Crystal Palace
These two have shared 19 goals in their last four meetings. And Palace definitely have the talent to breach Arsenal’s oft-shaky defence. And Pierre-Emerick Aubameyang is my guy. Over 3.5 goals is odds-against and should land. P.S. anyone not backing this stinks of arse. Pass it on.

Liverpool v Tottenham
The Reds, unbeaten in 44 at Anfield, are surely a knocking bet? It will be interesting to see if Mo Pochettino has the cojones to stick with Erik Lamela or bring back Christian Eriksen, whose form has frankly fallen off a cliff this season. Either way I expect Spurs to score but ultimately take a bit of a shoeing on Merseyside, given their last away win in the Premier League was back in January at Fulham. Which is actual madness.

Norwich City v Manchester United
The Red Devils ended Liverpool’s unbeaten 17-match winning run last weekend and while they did me for over £800 by not rolling over and dying in that one, they probably deserved at least a share of the spoils on reflection. Ole has a couple of key players returning and they suddenly look a team worth keeping an eye on from a betting perspective in the next couple of weeks.