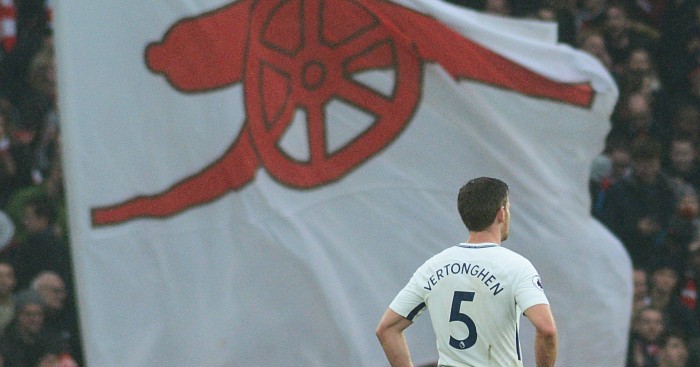 Jan Vertonghen has detailed how close he came to joining Arsenal in 2012.

The Belgian international had the choice between Arsenal and Tottenham when he was leaving Ajax and he chose Spurs despite the Gunners qualifying for the Champions League.

“It was as close as it can get,” Vertonghen told the Daily Mirror. “My agent went to Arsenal, I wasn’t there myself but it was very respectful and in the end I had to make a choice and I chose Spurs. I chose Spurs and I think it’s turned out well.

“I felt I was joining a great team, with great plans and the personal chats I had with people at Spurs were great and I followed my instinct, my gut feeling and that’s it.”

He has no regrets despite Arsenal winning three FA Cups since he arrived in north London while Tottenham have won nothing.

“We’ve done very well, we’re building a great team with the manager and the new stadium is coming up. I am very, very confident we will win a trophy very soon.

“You want to win trophies. I want to play in a cup final.

“Sometimes you need that trophy or a big win against a Real Madrid or top six side to realise how good you are.

“I am convinced that if you win one trophy, then the rest will follow. We are going to challenge for both (the FA Cup and Champions League) and then we are trying to finish in the top four, so we have three targets.”