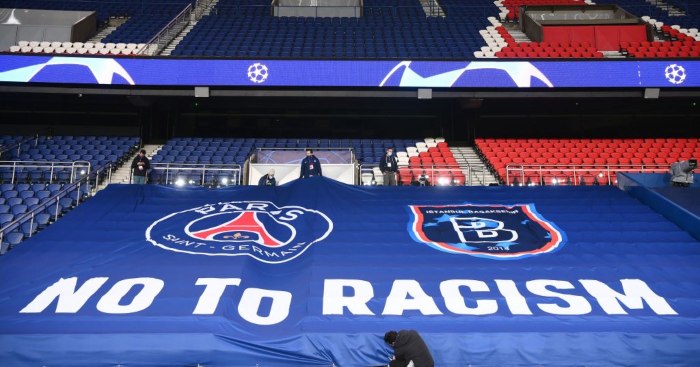 Benfica coach Jorge Jesus has claimed that complaining about racism is “very fashionable” when asked about Paris St Germain and Istanbul Basaksehir players walking off the pitch during their Champions League tie.

The Group H match in Paris on Tuesday night was halted in the 13th minute after it was alleged the fourth official, Romanian Sebastian Coltescu, had made racist remarks about Basaksehir’s assistant coach Pierre Webo.

“I don’t know exactly what happened, but these days all this about racism is very fashionable,” Jesus told a press conference before Thursday’s Europa League game against Standard Liege.

EARLY WINNERS: Demba Ba and PSG saying No to Racism

“As a citizen, I have the right to think my way and to form a concrete opinion once I know what happened in that moment.”

Webo accused the official of making a racist comment after he was shown a red card and, following Basaksehir’s complaints, PSG players followed their opponents off the field in the 23rd minute and the Turkish champions refused to reappear.

UEFA later announced that the game would be completed on Wednesday night, with different match officials, and that it had launched an investigation into the incident.

“It’s a wave that is taking over the world. But maybe there was racism because I don’t know what they said to that coach.”

Jesus, 66, is in his second spell as Benfica boss after signing a two-year deal in August, having spent six years in charge until 2015.

Benfica have already qualified for the Europa League knockout stages and could finish top of their group with victory in Belgium.