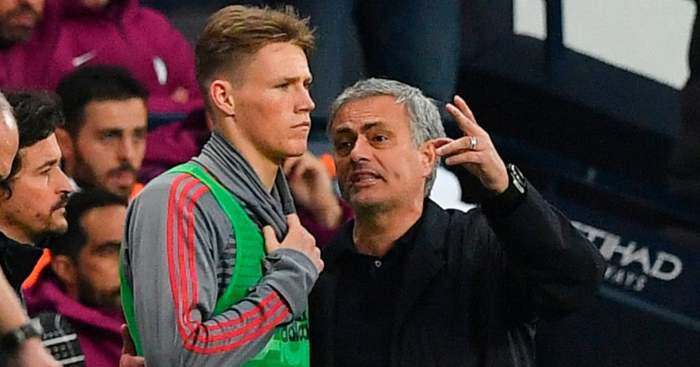 Scott McTominay says he owes Jose Mourinho a “tremendous amount of credit” for his development and has revealed that he is still in touch with the former Manchester United boss.

The Portuguese coach was sacked at Manchester United last December after high-profile clashes with star players Paul Pogba and Anthony Martial, while there was apparent discontent over the club’s failure to sign a defender in the summer.

And Mourinho has come under fire since for leaving the Red Devils in a worse position than when he took over but McTominay says he will forever be in debt to the man that delivered his big break at senior level.

McTominay told Sky Sports: “Jose is very special to me. He still keeps in contact with me now and keeps in touch after some games.

“I owe a tremendous amount of credit to him because if it wasn’t for him I might not necessarily be sitting in this seat.”

McTominay added: “I wouldn’t be at this football club if it wasn’t for Paul McGuiness, Dave Bushall, Tony Whelan and people like that who show an absolutely ridiculous amount of patience with somebody who can’t even play an U18 game because he’s growing, his legs are stretching and he’s got no co-ordination.

“Yeah they need to be patient. Off the pitch as well they have to be patient with you as well. There’s a lot of different things with school and in your education and your digs you’re staying in.

“Dave Bushall had to change my digs like three or four times because my mum at home wasn’t happy or whatever. It’s amazing the level of work they go to, to ensure that every family and every player is happy. It’s incredible and a real credit to the academy and the staff here as well.”