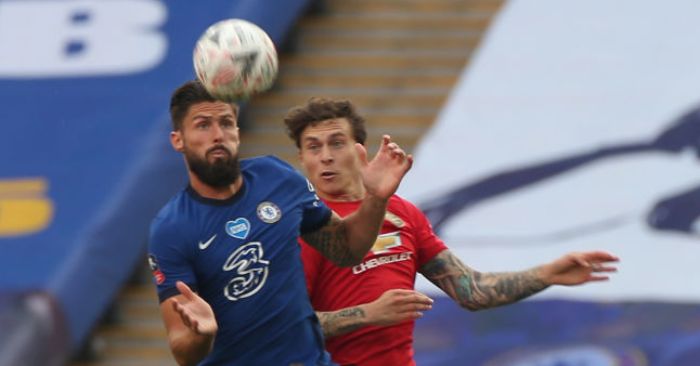 The crowd gathered at the raging dumpster inferno and stared, mouths agape. ‘Wretched keeping,’ screamed one bystander. ‘The goal looks worse for De Gea with each replay,’ shrieked another. While the firefighter was being questioned for failing to put out a blaze set five yards in front of him, an arsonist covered in ashes, shrouded in smoke and carrying lit matches used the distraction to flee the scene.

It did not help that David de Gea returned soon after to pour petrol on both the flames, himself and Ole Gunnar Solskjaer’s hopes of a first trophy in charge of his beloved club. That much is true.

But let the narrative not deflect from the imperative: Manchester United need a new centre-half.

Victor Lindelof spoke of how he “never really looked at” the contract offered to him in January. That was never a problem on Sunday. He glanced more than a couple of times at Olivier Giroud as Chelsea made tentative movements down the right-hand side in the first half at Wembley.

One look over his left shoulder to see the Frenchman walking back from an offside position; another as Cesar Azpilicueta, afforded the freedom of London by Brandon Williams, measured up a low cross; a third to see the ball rolling slowly towards the back of the net.

Lindelof had been bullied. It was bad enough that primary school student Michael Obafemi wedgied him on Monday, but this was a teacher embarrassing the struggling student for all to see.

It had that same air with regards to the managers, despite their relatively similar levels of experience. Chelsea benefited from a distinct advantage in terms of rest but Frank Lampard simply approached the game far better. His system was more suitable, his approach more clear and his team more focused. He has now beaten the top seven teams in the Premier League across three competitions, and could add a trophy to Champions League qualification in his first year of top-flight management.

Solskjaer compounded mistakes in his selection with errors in his formation. One of United’s three routes back to Europe’s top table have been blocked off and proof that Bruno Fernandes is not a universal plaster to address every ailment has finally arrived.

De Gea is not even their biggest problem – or at least not their least simple to solve. The reaction to his and United’s performance was predictably hyperbolic, with the BBC preparing a post-match selection of the goalkeeper’s mistakes this season and Martin Keown responding to a replay of Harry Maguire’s own goal with a half-hearted: “Even there De Gea’s not doing anything to help him.”

It was the second goal United had conceded from a driven cross that was converted from five yards out. When do you stop questioning someone’s faulty parachute for long enough to ask why they keep jumping off bridges?

There is a debate to be had, of course. That pertains to whether Dean Henderson should start as first-choice at Old Trafford next season or if Sergio Romero could be given an overdue opportunity to state his case. De Gea has been phenomenal for more seasons than he has been unreliable but credit is easier to run through in football than it is to build up. Solskjaer must be as ruthless as the manager he models himself on.

The same stands for Lindelof, who can only continue to hide in the shadows of others and escape censure for so long. It was he who kept falling asleep at United’s wheel; De Gea’s sloppy driving just so happened to veer into the car crash. While Jadon Sancho and Jack Grealish would tick their fair share of boxes this summer, a replacement centre-half capable on all terrains must be made a priority in the next transfer window.