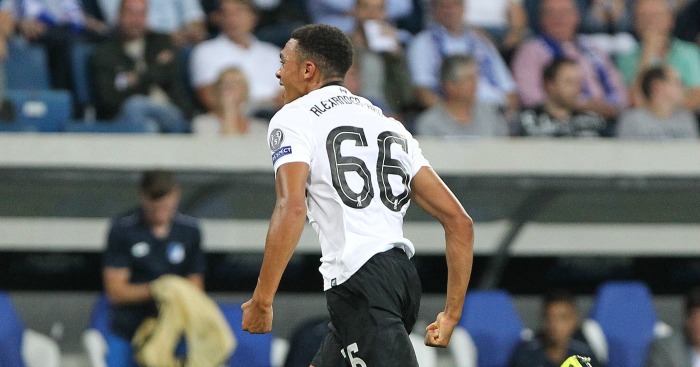 After a week which has featured a transfer request from their most valuable asset, some predictably disastrous defending in a 3-3 draw with Watford and no incoming transfers, Liverpool fans needed a reason to turn that frown upside down. Putting one foot in the Champions League group stages would have raised a cautious smile, but seeing Trent Alexander-Arnold emerge as the hero will have prompted delirious grins from Merseyside to Malaysia.

Not since the early days of Steven Gerrard and Jamie Carragher have Liverpool fans been blessed with a bona fide local hero. There have been Neil Mellors, Jay Spearings and Jon Flanagans who have fluttered but ultimately flattered to deceive, but none have announced their arrival on the biggest stage with a performance that would have been impressive even without a ridiculously brilliant free-kick.

You only allow an 18-year-old full-back to take free-kicks if you know he is special. You only allow an 18-year-old to take corners if you know he is special. But it’s one thing to hit an excellent dead ball; it is another to make the right defensive decision time and again, to anticipate, to intercept, to not hare all the way up the pitch to press the goalkeeper and leave a massive gap which ultimately leads to your side conceding a penalty. Alberto Moreno is seven years his elder but it is Alexander-Arnold who looks the more mature and accomplished footballer.

For all the calls for serious money to be spent on defensive and midfield reinforcements – and this performance against Hoffenheim did little to assuage any fears that Liverpool are woefully short in both departments – there is a particular joy to take in the emergence of a local footballer, raised on local heroes.

It was apt that Gerrard was in the BT studio beaming like a proud dad as Alexander-Arnold had merited a mention in his autobiography at the age of just 16. As the former captain wrote:

‘He has the right attitude and comes from West Derby, home to Melwood. So Trent is another Scouser and apparently, just as I tried to be John Barnes and Steve McMahon, he grew up pretending to be me while playing in the Merseyside parks.’

And it shows. Alexander-Arnold – who could yet play the bulk of his career in central midfield – has only the positive arrogance of youth, asking for the ball from his teammates or seeking it out from the opposition like a seasoned professional rather than a teenager with a handful of games under his belt. He was certainly paying attention as a childhood fan watching the force of nature that was peak Gerrard.

Liverpool’s first-leg victory over a team unbeaten at home in the Bundesliga since May 2016 could prove incredibly valuable, but this kind of win brings more relief than joy – particularly when it ends with the opposition being gifted a free header that threatens that win. But a first-leg victory in which an 18-year-old West Derby boy scores a truly memorable goal and looks the best player on the pitch? That breeds pure ecstasy.

Will there be kids pretending to be Trent Alexander-Arnold while playing in Merseyside parks within the next five years? It might even happen tomorrow…