Home All The News Vieira: Arsenal lacking physicality and personality 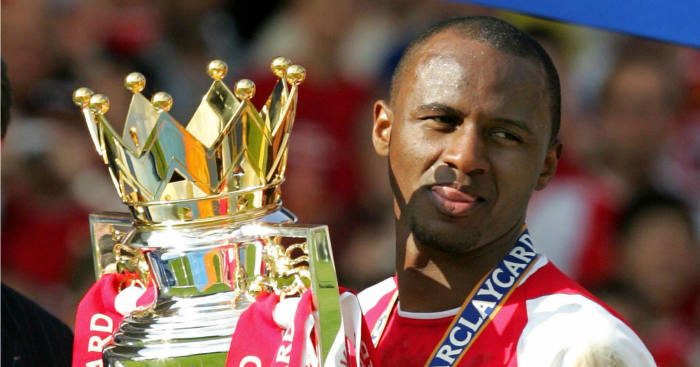 Patrick Vieira suggests Arsenal’s biggest problem is a lack of physicality throughout the whole team.

Arsenal have failed to win a league title since Vieira, who captained the ‘Invincibles’ left the club in 2005.

And in an interview with The Times, the current New York City boss discussed why the Gunners have struggled to replicate their success in the late 90s and early 00s over the last decade.

“We had [Dennis] Bergkamp, who had the flair; Thierry Henry who could finish and had so much power; athletic players with the physical aspect like Sol Campbell; and some really strong personalities with [Jens] Lehmann or the back four,” he told.

“This Arsenal Invincibles was quite like the French national team when we won the World Cup in ’98, when we had physical players, players with flair, players with pace.

“I enjoy watching Arsenal play now. They play some of the best football in the league. But they’re missing the physical presence, the personality. In our generation we had some fantastic players with the ball but the majority of the players were quite physically strong.

“This last five or six years, Arsenal went more with this type of mobile, technical players who are completely different.”

Following Saturday’s draw with Leicester, Arsene Wenger hit back at criticism of his reluctance to spend.

Granit Xhaka is the club’s only big-money signing of the summer, but Vieira has a degree of sympathy for his former manager.

“You can spend as much as you want, I don’t believe that will guarantee the titles, but the better players you have the better chance you have,” he said.

“The fans expect Arsene to bring more players in but if the player’s not worth the valuation, he doesn’t want to spend the money. In one way, I respect that because in the world we live in there’s a lot of pressure to bring in players. He’s being really brave not bringing in players who don’t fit the system he wants to play or aren’t of the value he seeks.

“I quite admire that in the world where some clubs have so much money, they buy players for £40m who are worth £10m. But the other side is that the team is not as good as it used to be. You need to reinforce the team but he’s training every day with the players and may believe they can do it.

“I still believe they’re going to be in these five teams who can win the title.”