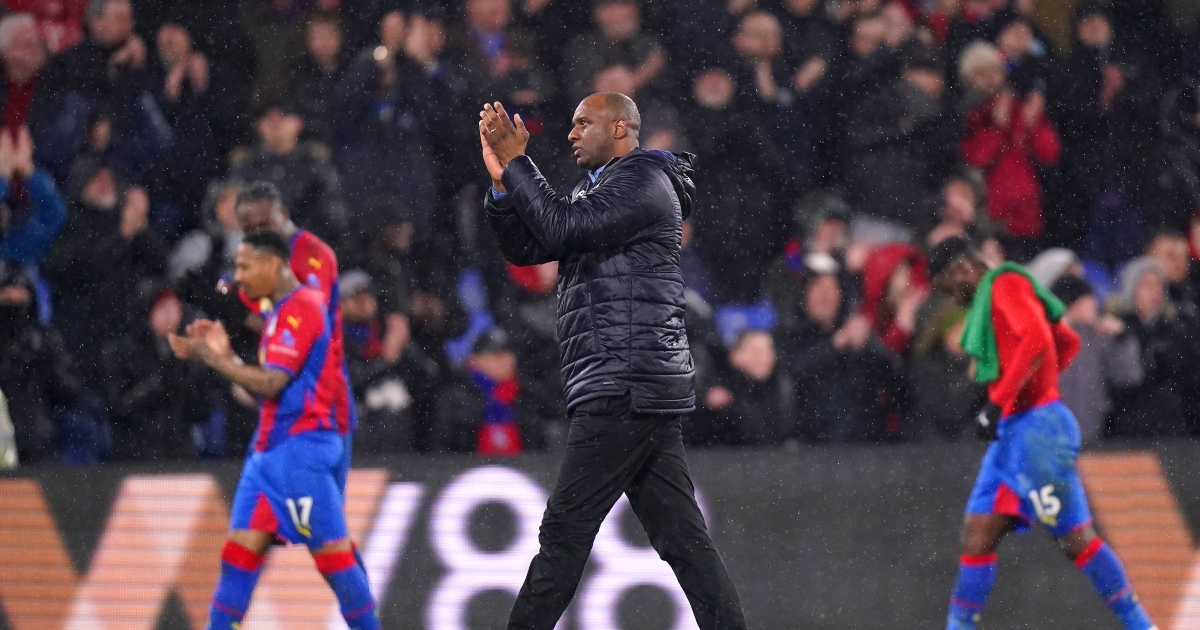 Patrick Vieira has told his Crystal Palace players not to get carried away by their FA Cup run as they get set for a tough month in the Premier League.

The Eagles booked their place in the last eight of the competition with a 2-1 win over Stoke earlier in the week and discovered on Thursday they will host Everton for a semi-final spot, which would mean a trip to Wembley.

Palace have a nine-point advantage over the relegation zone but the 45-year-old urged his squad not to get too excited with plenty to play for in the division.

“No, honestly we did not talk about the draw at all,” Vieira insisted.

“The only conversation this morning in training was about the Wolves game and how important it is for us. We have had some positive results lately and it is important for us to keep that momentum.

“We wanted to have a really good run in the FA Cup and so far it has been good but there is still the game to come against Everton and a long way to go (before Wembley).

“We don’t want to get carried away or be too excited for it. We are pleased with where we are but we still know there are massive games to play before the FA Cup.

Tomorrow we head to WV1 🦅#CPFC

“In the league the games coming before will be massively important for us because we need points, need wins but going through builds this momentum, confidence and excitement we need and want.”

While 11th-placed Palace may look enviously at Wolves, sitting in eighth and in the mix to qualify for Europe in Bruno Lage’s debut campaign, Vieira pointed to the summer upheaval at Selhurst Park when asked to reflect on his own first term with the south Londoners.

He added: “We knew that it would be a challenging season because of the turnover we had.

“When we have so many young players coming in, especially from the Championship, they may take time to adapt themselves to the Premier League but those players did fantastically well.

“All the credit to the support around the football club. We are never satisfied because we always want more, this is the game but there is still a lot to come from this group of players and hopefully we have an exciting end of the season.”

Palace’s best route into Europe would be to win the FA Cup but chairman Steve Parish was critical of UEFA on Thursday during the Financial Times Business of Football Summit.

Parish, who took over the club when they were in administration in 2010, described the governing body of European football as “the greatest enemy of domestic leagues that exists” and in particular focused on the way money is distributed from UEFA competitions.

Vieira backed his long-serving chairman for speaking up, he said: “When you look at when he bought the club and where it is today, he has the credibility to express himself.

“He went through what the club is today and I think he managed to build a sustainable football club. His experience has to be listened to. I think he has the credibility and experience to express himself regarding what is going on at the moment.”