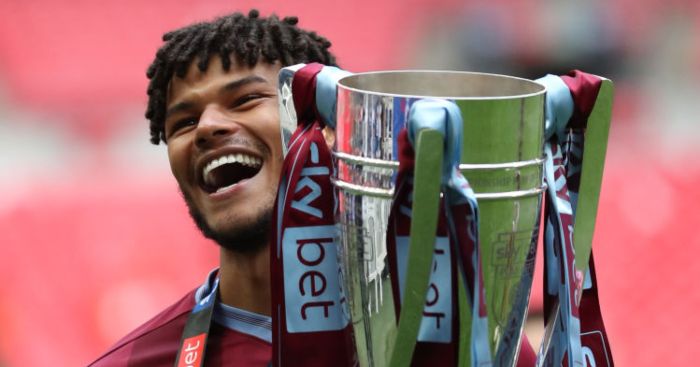 Aston Villa have agreed a potential club-record fee to sign Tyrone Mings on a permanent deal from Bournemouth.

Mings impressed at Villa Park on loan in the latter half of last season, helping guide Dean Smith’s side to promotion via the play-offs.

Deemed surplus to requirements by Bournemouth, for whom he has made just 17 Premier League appearances since joining in 2015, the centre-half will stay in the West Midlands beyond the summer.

Numerous outlets suggest Villa will pay an initial fee of £20m, which could rise to a record-breaking £26.5m with add-ons.

Mings will not have to undergo a full medical after spending the past six months at the club, meaning ‘a deal is likely to be concluded in the next 48 hours’.

The Daily Telegraph say moves for Kalvin Phillips (Leeds), Adam Webster (Bristol City) and Said Benrahma (Brentford) are also being considered, but Villa ‘are reluctant to pay the fees demanded’.

Update of sorts, if you want.. Big issue with fees – Phillips, Benrahma and Webster. Dialogue on hold on those 3. Mings could move on this week. Cahill is a possibility, but there are other clubs in. Villa want 8-9 signings.

The first two have been valued at £30m, with winger Benrahama priced up at £20m.