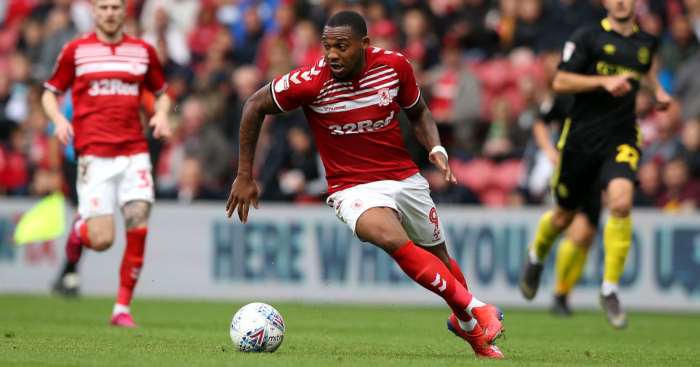 Aston Villa are reportedly set to dip into the transfer market again, as they step up their interest for Middlesbrough striker Britt Assombalonga.

The West Midlands side confirmed the loan signing of Danny Drinkwater from Chelsea yesterday but are now looking to secure their striking options after Wesley was ruled out for the rest of the season with knee ligament damage.

The DR Congo striker has had injury problems of his own this season and is currently sidelined with an ankle injury. However, he still has 6 goals from his 20 appearances this season and when fit, is Boro’s best striking option.

Villa have been left pretty toothless upfront after Wesley’s injury, with Jonathan Kodjia their only fit senior striker. Boro have their own problems at striker though with manager Jonathan Woodgate reluctant to be left with just Ashley Fletcher and Rudy Gestede as his only striking options.

Assombalonga broke Middlesbrough’s transfer record when he joined for £15 million from Nottingham Forest in the summer of 2017.

The Northern Echo claims that Villa Head Coach, Dean Smith, approached Chelsea over the possibility of a loan deal for Belgian striker Michy Batshuayi but that Frank Lampard was adamant on keeping him for the remainder of the season.

This means that the Villans may have to pay a premium for Boro’s talisman but with only 18 months remaining on his contract at the Riverside, it might be the right time for Middlesbrough to sell Assombalonga.