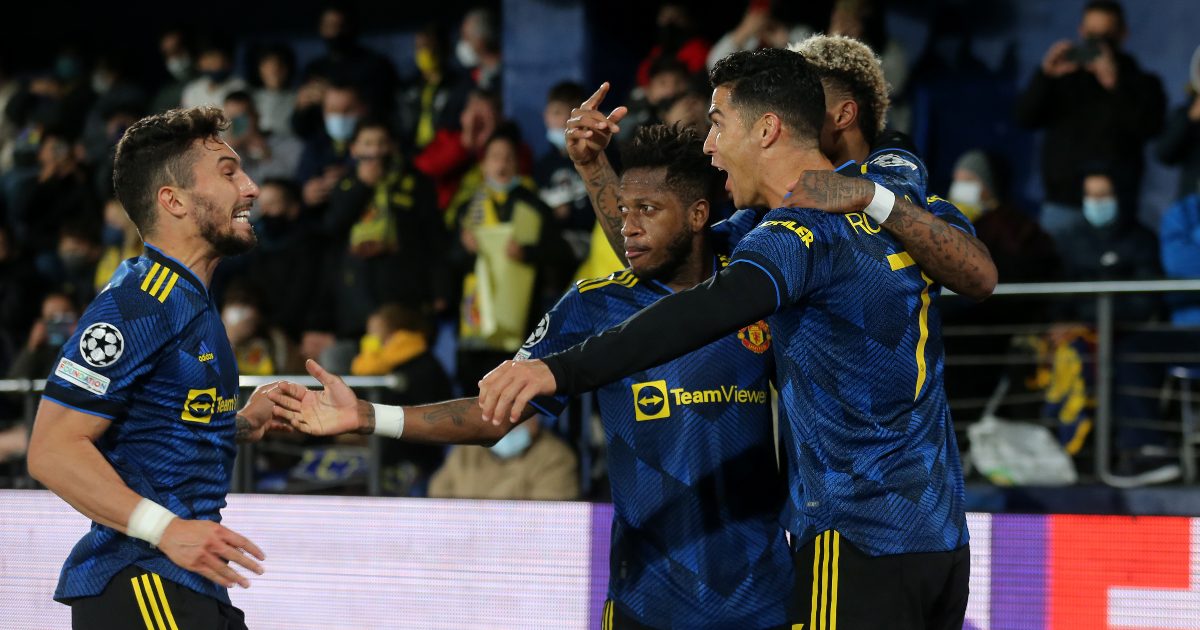 Cristiano Ronaldo and Jadon Sancho got on the scoresheet as Man Utd beat Villarreal to book their place in the knockout stages of the Champions League.

The Red Devils grew into the game and goals late on from Ronaldo and Sancho earned them all three points.

This result ends the English side’s three-game winless run that led to Ole Gunnar Solskjaer losing his job on Sunday.

Elsewhere Man United’s managerial search continued – Ernesto Valverde the latest candidate linked with the interim role as Mauricio Pochettino played down his interest in swapping Paris St Germain for Old Trafford – but here the focus was on Carrick.

The 40-year-old, who was integral to Solskjaer’s set-up and had said in Tuesday’s press conference that his ideas were similar to the Norwegian’s, made a major statement on the teamsheet with Donny van de Beek, starting only his third match of the season, selected ahead of Bruno Fernandes.

That was one of four changes – Alex Telles came in for Luke Shaw in an enforced move, while Anthony Martial and Fred came in for Nemanja Matic and Marcus Rashford.

United fans, high above the goal in Villarreal’s El Madrigal, sang Solskjaer’s name during a seven-minute delay to kick-off due to problems with the officials’ radio sets.

When play did get under way, Martial partnered Ronaldo in attack with Van de Beek at the tip of a diamond midfield, though United struggled to make much of an impression going forward.

Scott McTominay had an early chance from a free-kick, heading into the side-netting, but it was a familiar story of United looking too passive in midfield, and giving away possession too easily to offer Villarreal chances.

The best of them came in the 27th minute when Pino pulled the ball inside for Manu Trigueros, whose first-time shot was kept out by a strong hand from David De Gea.

Carrick, prowling the technical area, watched on as Ronaldo headed straight at Geronimo Rulli before firing a free-kick into the wall from a dangerous position.

But the better openings were at the other end. Arnaut Danjuma, an injury doubt before the match, fired wide after Aaron Wan- Bissaka lost possession.

It was De Gea to the rescue again just before the hour mark, with the goalkeeper denying Trigueros with a strong right hand after Danjuma’s shot was deflected into the midfielder’s path.

United were living dangerously, with Danjuma firing over after Wan-Bissaka allowed him too much space.

But Carrick’s double substitution of Van de Beek and Martial for Fernandes and Rashford changed the game, with United on the front foot thereafter.

Sancho brought a fine save from Rulli after cutting in from the right and exchanging passes with Ronaldo.

Moments later, United led, and this time Rulli needed to hold his hands up. The goalkeeper’s short pass played Etienne Capoue into trouble. Fred got a toe to the ball and Ronaldo did the rest with a lob over Rulli.

The Portuguese almost had another five minutes later, a short header back from Juan Foyth allowing him to nip in but he poked his shot just wide.

Villarreal were run ragged – Rashford shot straight at Rulli before Fernandes’ effort was deflected wide, and United inflicted the killer blow at the death.

Ronaldo started the counter in which Rashford and Fernandes switched play to the right, where Sancho fired home to leave the travelling fans chanting Carrick’s name.