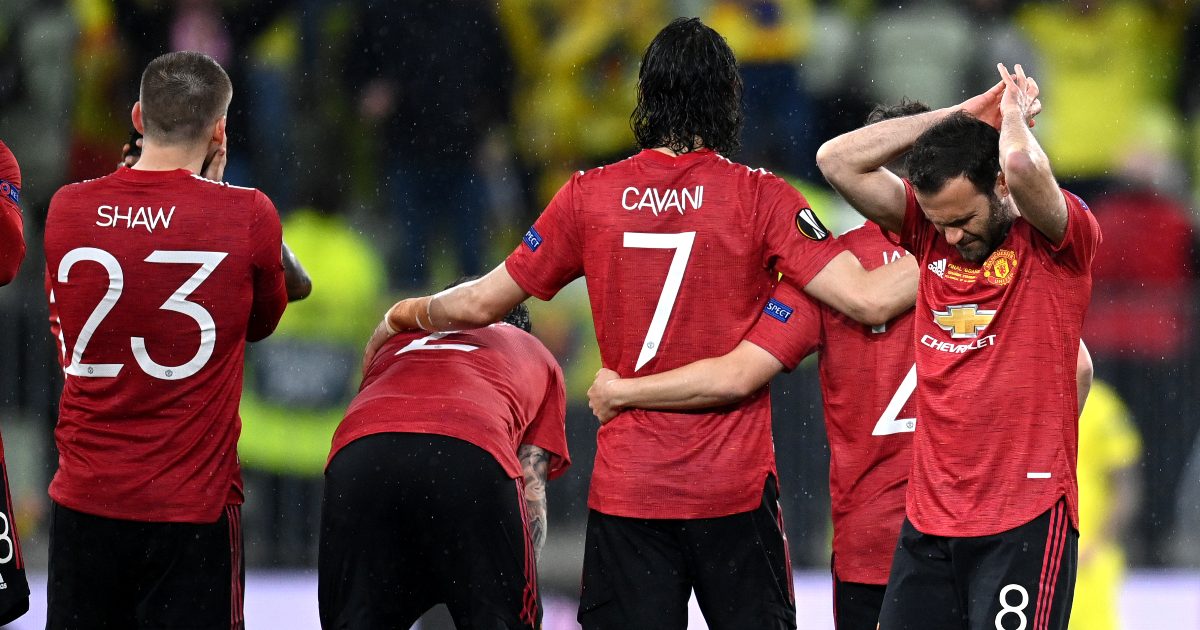 Man United ‘keeper David De Gea was the first player to miss in the shootout and that was decisive as Unai Emery’s Villarreal were victorious 11-10 on penalties.

On this day 22 years ago, the Norwegian wrote himself into club folklore when turning home at the death as Sir Alex Ferguson’s side fought back to win the Champions League and complete the treble.

But May 26, 2021 did not provide another triumphant chapter in United’s success-laden story, with the match ending 1-1 and going to a penalty shootout after Edinson Cavani cancelled out Gerard Moreno’s opener.

Solskjaer is Darth Maul and a ‘patsy for the Glazers’

All outfield players scored their spot-kicks, as did Villarreal goalkeeper Geronimo Rulli before saving De Gea’s penalty to win the shootout 11-10 and secure the first major trophy in their history.

It was a heartbreaking end to a promising season for Man United, who finished as Premier League runners-up and showed clear signs of progress.

But defending set-pieces has been a problem throughout and Moreno opened the scoring when all too easily meeting Dani Parejo’s terrific free-kick.

Cavani levelled early in the second half after Marcus Rashford’s volley fell kindly for him from close range and Villarreal clung on for extra-time, which Unai Emery’s men edged before triumphing on penalties.

Villarreal’s success-starved fans went wild at Stadion Gdansk, where you would not know there were only 9,500 in attendance given the din throughout.

Luke Shaw fizzed a dangerous cross in at the other end and Rashford saw a hopeful long-range strike saved but United were stuttering and Villarreal went ahead from a 29th-minute free-kick.

Moreno peeled off Shaw as Parejo’s ball came in, with Victor Lindelof caught out by the Spanish sharpshooter’s run behind him as he directed past De Gea – selected instead of Dean Henderson – to send the wall of yellow wild.

Solskjaer was fuming on the touchline and his mood did not improve with United’s meek response.

Raul Albiol almost turned a Mason Greenwood cross into his own net in stoppage time and United returned early for the second half, which started with ex-Villarreal defender Eric Bailly almost putting his team in trouble.

But United were far improved on the whole after half-time. The video assistant referee decided against awarding a penalty for Alfonso Pedraza’s challenge on Greenwood and Solskjaer’s side levelled in the 55th minute.

Scott McTominay saw a strike blocked behind for a corner, which was swung over by Shaw and cleared only as far as Rashford on the edge of the box.

The volley ricocheted off Pedraza and McTominay, wrongfooting goalkeeper Rulli as Cavani reacted quickest to turn home from six yards.

Europa final failure not an option for Solskjaer and Man Utd

The veteran took the ball and ran straight back to the halfway line, with the goal awarded after a lengthy VAR check for offside in the build-up.

Bruno Fernandes – captaining the side with Harry Maguire only fit enough for the bench – fired wide as United kept up their renewed intensity, with handball appeals against Torres ignored.

Rashford was relieved to see the offside flag raised after somehow turning wide from close range, with Cavani seeing a header blocked from a driven Shaw cross moments later.

Rashford flashed a snapshot wide as Villarreal dug deep, with Paul Pogba heading over before the match entered extra-time.

Villarreal were looking energetic and more dangerous in the first period of additional time – little surprise given Solskjaer did not make his first change until the 100th minute.

Tension was increasing as the match edged towards penalties, with Fred escaping a review after a shot to hit his hand.

United offered precious little threat during extra-time and the match went to spot-kicks.

There were some brilliant penalties, close shaves and poor attempted saves, with all outfield players finding the net as it went down to the goalkeepers.

Villarreal goalkeeper Rulli scored and then stopped De Gea to end United’s hopes of ending their four-year wait for a trophy in Solskjaer’s first final in charge.