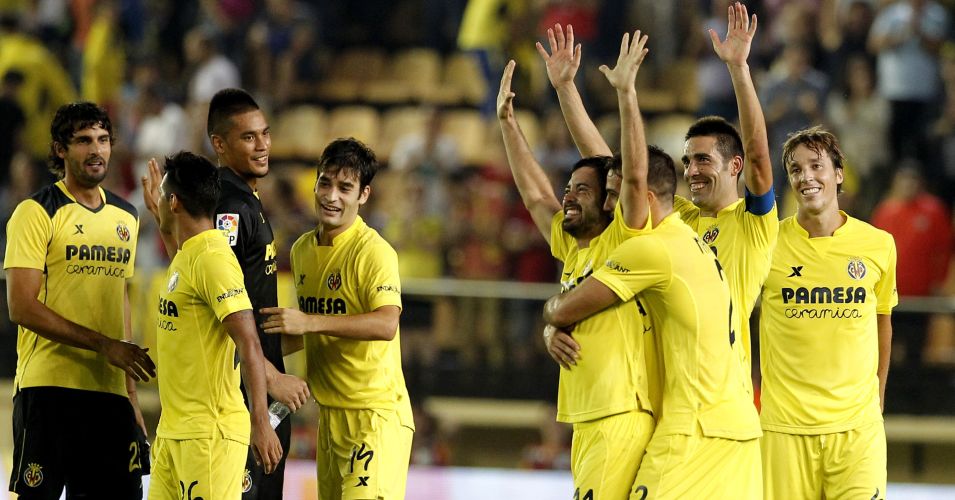 The Villarreal side that reached the Champions League semi-finals in 2006 was a wonderful thing, so watching their recent resurgence invokes similar feelings of joy. They’re just a lovely club run in the right way…

While having a second side in your own country is considered poor football-supporting form, everybody has a favourite European club. These are usually taken from your formative football years, when any club with a name ending in a vowel was considered sexy. No not you, Crewe Alexandra and Northwich Victoria.

Parma, Fiorentina, Dortmund, Benfica and Deportivo were all mysterious teams from Anotherland, seen only through occasional ITV Champions League coverage or Channel 4’s Football Italia. A small part of my heart has always stayed with Villarreal.

Unlike the other examples, this foreign fancy did not stem from the mid-90s but a full decade later, when this small-town club somehow endeavoured to reach the Champions League semi-finals. Under the stewardship of Manuel Pellegrini (who has changed so little in the ten years since that it’s scary), Villarreal’s front six wowed me – Marcos Senna, Alessio Tacchinardi, Santi Cazorla, Juan Roman Riquelme, Diego Forlan and Guillermo Franco. Swoon, swoon and swoon again.

Villarreal’s initial rise was as romantic as any of the recent European fairytales, including Paderborn, Ingolstadt, Carpi, Sassuolo, Evian TG and Eibar. This is a town in Castello which lives for its football team. The population is somewhere just over 50,000; the El Madrigal stadium seats almost half that many.

Other than a short period in the 1970s when they spent two seasons in the second tier, Villarreal were a provincial club who knocked around the lower leagues until they were bought by Fernando Roig in the early 1990s. It’s at this stage that I should probably start referring to Roig as ‘the saviour’, such is his effect on the club. If El Submarino Amarillo are moving forward, then Roig is at the wheel (wheel? Helm? I don’t know how submarines work).

Roig, a wealthy local businessman, ensured promotion to La Liga for the first time in 1997/98 and, after a few yo-yo seasons, established Villarreal as a top-flight club. By April 2006, they were on the brink of the European Cup final. Riquelme missed a late penalty against Arsenal in the semi-final that would have assured extra-time, but every good story needs a large pinch of glorious failure.

Despite his riches, Roig made the decision to develop the club sustainably rather than through wild spending. The club implemented policies of widespread South American scouting and taking on unwanted players from other clubs with the aim of reinvigorating their careers. The two most famous examples were Forlan (from Manchester United) and Riquelme (from Barcelona) – I could write loving, naval-gazing pieces on both. They then sold players (including Pepe Reina and Juliano Belletti) at substantial profit to fund further purchases. That aforementioned wonderful front six cost under £10m in total.

It was the style of that Villarreal side which made them so attractive. In a different manner to many other La Liga teams of the time, Pellegrini introduced a dynamic pressing game with speed on the counter the most dangerous weapon. The short passing of Tacchinardi, energy of Cazorla, tackling of Senna, skill of Riquelme and finishing of Forlan made for a wonderful spectacle, and the El Madrigal atmosphere made you tingle even through your television. As Spanish football journalist Graham Hunter said: “They had a small stadium, a small budget and a small local community… but massive dreams.” This was football to cleanse and enrich the soul.

For so long retaining the reputation of Spain’s most well-run club, Villarreal’s grip on glory could not hold. Strangled by the LFP’s ludicrous broadcasting deal, the club lost key players and coach at exactly the wrong time. First Pellegrini left for Real Madrid in 2009 after five years at El Madrigal, and then the next two years saw Santi Cazorla (Malaga), Joan Capdevila (Benfica), Diego Godin (Atletico) all leave. The previous summer had seen Forlan (Atletico), Riquelma (Boca), Jose Enrique (Newcastle) and Antonio Valencia (Wigan) depart. The club just couldn’t cope.

Roig’s dream was to use the academy to make up the shortfall, but it was a forlorn hope. Villarreal were relegated in 2012 after finishing fourth the previous season, dire league form instigated by an impossible task in the Champions League. Placed in a group with Manchester City, Bayern Munich and Napoli, they lost every single game, the first Spanish team to suffer this fate. Promoting two ‘B’ team coaches in succession may have been the cheaper option, but it failed to halt the slide.

If Villarreal’s decline was not tragic enough, new coach Manolo Preciado then died of a heart attack on the day he had been appointed as the club’s new coach, Julio Velzquez promoted from the ‘B’ team in his stead to no great effect. Nilmar, Giuseppe Rossi, Marco Ruben, Diego Lopez and Borja Valero all also left in that close season. The club was on its knees.

It was at that point that Roig truly earned his hero status. Rather than remarking that we’d all had a lovely time but that was that, this was costing too much thank you very much, he simply dug deeper. Not only did the owner completely clear the club’s debts as a gesture of a goodwill, but he also acted after the recession hit the Castello region. With unemployment at 30% in the town, Roig allowed season ticket holders who became unemployed to watch for free.

“What we want is to fill the ground,” Roig said in an interview with Sid Lowe for World Soccer Magazine. “The money in football comes from television; the sentiment, the feeling, comes from the fans. So you have to help the fans to fill the stadium. The kick-off times for games are what they are, they do not help, but we still want to fill the stadium. There are few things sadder than seeing an empty stadium.” His approach was scoffed at by other La Liga owners, but frankly that only paints Roig in a more celestial light.

Back in the top flight at the first time of asking, now the fairytale has a new chapter. A 1-0 weekend victory over Atletico took Marcelino’s team top of La Liga for the first time in their history. It won’t last, of course. La Liga is so weighted in favour of its duopoly that both of Barcelona and Real Madrid will soon pass the Yellow Submarine. But that is beside the point – Villarreal are out of the shadows once again.

Back on an even keel financially and again growing sustainably, Roig is understandably upbeat about the future. Their model is similar to that of Southampton, the development of notable academy graduates complemented by signings who they will aim to sell at a profit.

“Right now, we don’t have the need to sell any player,” Roig says. “If we do sell one it will be because the player wants to go and the buying club pays the money we want.” That could be written at the top of the St. Mary’s blueprint. The next on the production line are Manu Trigueros and Mario Gaspar, with Mateo Musacchio also courted across Europe.

Relegation is rarely considered a good news story, but in Villarreal’s case it allowed for the most positive of spring cleans, an affirmation of the club as the heart of its community. It’s not every billionaire owner who will place a set of supporters so firmly at the top of his priority list, but then Roig is both able and willing to separate football club and business. So few others are.

“I don’t manage the club,” is Roig’s insistence. “Those 48,000 fans make this club and I could never consider myself as somehow ‘in charge’ of all those people. The most important thing in this job is managing the relationships so that everybody is giving of their best. In football it’s all about feelings.”

Amen to that. Villarreal might not stay on top of La Liga for long, but their resurgence provides hope that there is another way. Long may their success continue.