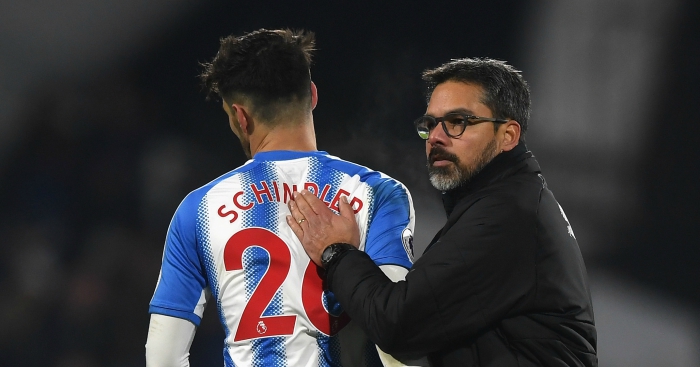 Sam Vokes insisted his elbow on Christopher Schindler that left the Huddersfield defender bloodied and bruised was entirely accidental.

The incident occurred during the second half of the 1-1 draw between Burnley and the Terriers at Turf Moor. The two players, the goalscorers in the match, jumped together for a ball in the Huddersfield penalty area and Vokes caught Schindler with the point of a swinging elbow.

Schindler put his body on the line again moments later, blocking a shot with his face, before going down and requiring several minutes of treatment. Medics attempted to stop the bleeding from two cuts, one on the bridge of his nose and one under his right eye.

He was able to finish the game after a change of shirt. Huddersfield manager David Wagner called the challenge “ugly” in his post-match press conference but stopped short of accusing Vokes of any deliberate action.

Welshman Vokes said: “I was backing in and he happened to be there and I caught him with a stray elbow. I apologised to him afterwards, it was nothing intentional. It was just one of those things where you’re up against the centre-half. I’ve had plenty of them from the other side.

“Obviously when you have an opponent lying down for that amount of time, no-one wants to see that. I was glad to see him return back to the pitch.”

“I don’t want to say that he did it on purpose,” said the Huddersfield defender, who had earlier scored his first Premier League goal.

“They’re a physical team, strong guys and they try to free them up, use their arms. Obviously my nose was in the way this time.”

Schindler was confident he had not suffered any serious harm, saying: “It’s a little bit sore. I’ve got a headache but the rest is OK.

“It was quite a strong hit. I saw the ball was still in a dangerous area so I got my head on the second ball as well. I felt straight away it was dripping and I felt sure it was blood so that’s why I went to ground. My nose wasn’t the prettiest before so maybe it’s good for me!”