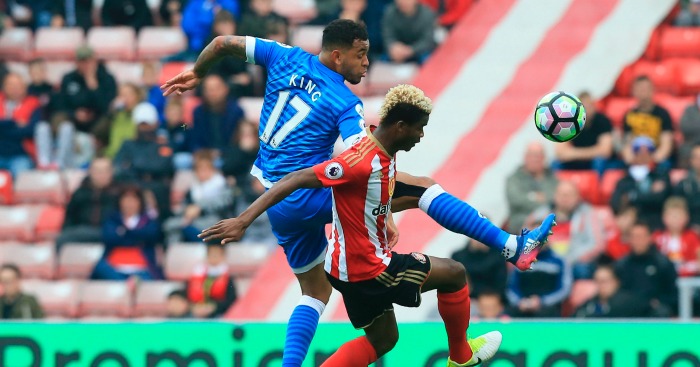 With relegation places confirmed following the penultimate weekend in the Premier League season, we will now see which dropping footballers are deserving of a place in England’s top tier next season. There have been a host of impressive performers near the foot of the table, and a number of players have already been linked with summer switches.

Josh King (Bournemouth)
After a so-so debut Premier League campaign for Bournemouth, Josh King has thrived in his second season in the top flight. His 16 league goals ranks among the top 10 players this season with the Norwegian striker netting nearly a third of Bournemouth’s Premier League total so far this season. Having scored just three goals before the turn of the year, only Romelu Lukaku and Harry Kane (both 14) have scored more than King (13) in 2017. It earned him a spot in our top ten strikers of the season list.

Indeed, his excellent showings on the south coast have seen him linked with a summer move away from the Vitality Stadium and he could certainly do a job for a side that averages more key passes per game than Bournemouth (9). A 23.9% conversion rate ranks among the best in Europe of those to have scored 15 or more goals this season, while an ability to play as either the lone frontman or behind a striker highlights his versatility, making him an appealing option for any team.

Marten de Roon (Middlesbrough)
It’s fair to say that Marten de Roon failed to live up to expectations in the wake of his summer arrival from Atalanta. That being said, it has been tough for any Middlesbrough player to entirely excel in what has been a disappointing campaign to say the least. The Dutchman arrived as the tough-tackling midfielder required to help Boro having made more tackles and interceptions combined (253) than any other player in Serie A last season, yet it wasn’t enough to keep the north-east side up.

To his credit, the 26-year-old showed just about enough to impress and it wouldn’t be too great a shock to see a Premier League side make a move for the Dutchman. While he’s unlikely to secure a switch to one of England’s elite teams, De Roon’s battling performances would appeal to one of the newly promoted sides or one of the glut of mid-table finishers.

Harry Maguire (Hull)
Despite Hull’s relegation, Harry Maguire is one player who can be expected to ply his trade in the Premier League next season. The defender may already have played his final game for the Tigers after suffering an injury in the 4-0 loss at Crystal Palace and with vultures circling, Hull are braced for offers for Maguire this summer. His notable reading of the game means he is averaging 2.2 interceptions per game this season and he could be a handy addition to any Premier League outfit.

He might look like a no-nonsense defender but his versatility and power at the back would be a benefit for any side. Indeed, he’s completed more dribbles (29) than any other Hull player in the Premier League this season, with his control when in possession a handy asset. Hull would be reluctant to cash in on Maguire, but they could be left with little choice but to sell should a suitable offer come in for the centre-back.

Alfie Mawson (Swansea)
Another centre-back who is on the right path to bigger and better things is young Alfie Mawson, who has taken to the rigours of Premier League football like a duck to water. Signed from Barnsley last summer, the 23-year-old is now a mainstay in the Swansea backline on the back of a number of mature performances alongside Federico Fernandez. His form ensured Swansea are playing Premier League football next term and it’s unlikely to have gone unnoticed.

Many tipped Mawson for an England call-up earlier in the year and while he was unable to force his way into Gareth Southgate’s selection, it’s surely only a matter of time before the defender is considered for his first senior cap. With large sums reportedly on offer for Ben Gibson and Michael Keane, could Mawson be the next to move?

Didier Ndong (Sunderland)
A number of Premier League sides broke their transfer records to sign attackers last summer, but Sunderland did so securing the services of defensive midfielder Didier Ndong from Lorient. The Sunderland players attracting the most Premier League interest are Jordan Pickford and Jermain Defoe, but Ndong is another who showed glimpses of his talent in a disappointing campaign for the Black Cats. Sunderland are a stronger side with the Gabon international in the team, noted in that David Moyes’ side have won none of the ten top-flight games the 22-year-old has not started this season.

His energy and tenacity are handy attributes to possess – 2.9 tackles and 1.9 interceptions per 90 highlight the youngster’s work off the ball and he could be a handy pick-up for one of the newly promoted sides.