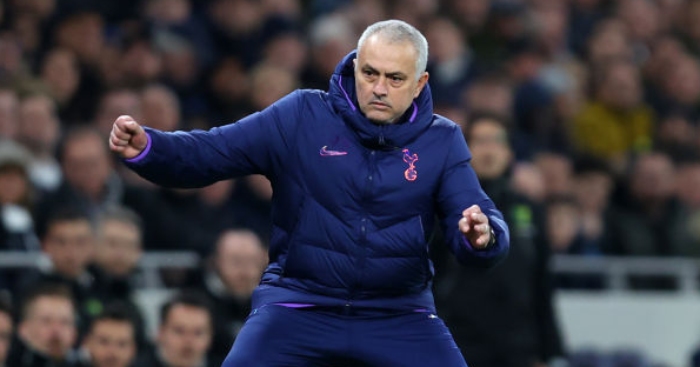 Tottenham legend Chris Waddle claims Jose Mourinho needs time to make his mark after already proving his worth after taking over from Mauricio Pochettino.

The Portuguese tactician had been expected to make a major difference at the club, but after an initial lift, Spurs have struggled for consistency and lost their last four games in all competitions.

Mourinho was brought in to end the club’s 12-year wait for silverware, but an FA Cup exit at the hands of Norwich in midweek looks to have ended those hopes – despite Spurs still being in the Champions League, where they are 1-0 down to RB Leipzig in their last-16 tie.

Speaking to the Racing Post, Waddle said: “Managing Tottenham is the biggest challenge Jose Mourinho has ever faced – but I still think it’s too early to judge him.

“He inherited from Mauricio Pochettino a squad who were struggling in the Premier League and clearly in need of a revamp.

OPINION: Jose Mourinho and a legacy of anything but football…

“His first job was to instil some belief and get them climbing the table again and he’s done that to the point that they are right in the hunt for a Champions League spot.

The former England winger added: “Suddenly they have lost two goalscorers and results have started to go against them, they are out of the FA Cup and probably heading out of Europe, and people are questioning Mourinho. But I don’t think this is his side yet and you can tell that by the number of goals they are scoring and conceding.

“Everybody thought life would be boring under Mourinho with a lot of 1-0 wins and the bus being parked, yet we’ve hardly seen that. Goals have been flying in at both ends of the pitch which isn’t what we associate with a Mourinho team.

“It’s quite possible he has just looked at the squad and thought I haven’t got what I need to play the way I would like so I’m going to have to go a different way – almost the old Tottenham way – and now let’s just see if we can score more than the opposition.

“He has to get through this season and rebuild in the summer, and I reckon you’ll see a proper Mourinho side turning out in August.”

“He needs a right-back, he needs a centre-back and he needs at least one holding midfielder to add some protection. He also needs another central striker to back up Harry Kane – although if you believe what you read Kane might not be at the club next season.

“I don’t know whether that is true or not but it’s another potential headache for Mourinho to have to deal with.”