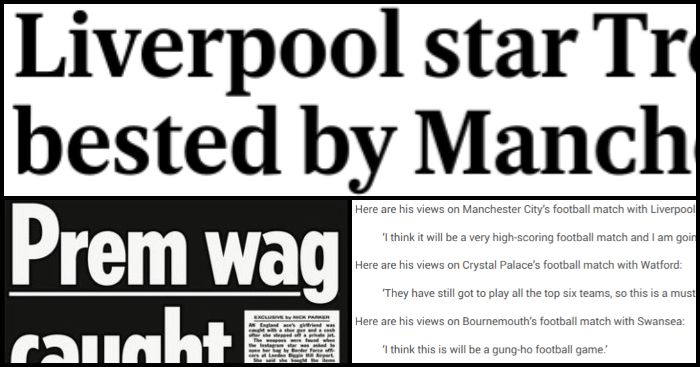 The English language is a wonderful and mercurial beast, flexible in the extreme and ever-changing. This may explain why it is spoken by more people on earth than any other language. But that doesn’t mean when it comes to football that it isn’t being heinously abused. Here are seven of the worst modern linguistic developments that need to be expunged from our lives. And yes, we are guilty of some…

1) ‘Bested’
An import from American sports. Quite what was wrong with the word ‘beat’, I don’t know. ‘Burnley bested Manchester City 1-0’ is more vague than using ‘beat’. You can ‘best’ a team, ie be the best side, and still lose. Beat is unequivocal. Burnley beat City 1- 0 tells the result perfectly. Don’t mess with it.

2) ‘The optics’
As in ‘what are the optics?’ or ‘the optics aren’t good’. It’s evolving even as we speak. I recently saw a tweet referring to the Saudi takeover of Newcastle which read ‘why isn’t everyone screaming “optics”?!’ Probably because they have no idea what you mean.

I don’t know much about sports … had to google Newcastle United… sorry.
But …I do know what bad optics are and this is one! What is wrong with the UK to ever entertain this takeover?

This term must have come out of the marketing industry. It sounds like the sort of thing coke-snorting BS merchants would come up with as a way of pretending they’re cool. It’s essentially jargon. The word you’re looking for isn’t optics it is ‘look’. ‘Will no-one think how that looks?’ That works perfectly, why change it to something more obtuse?

3) ‘…needs minutes’
As in “he needs minutes” to describe the unfit or under-used player. Like a lot of passing fashionable expressions, it attempts to aggrandise something simple, in this case the word ‘play’. When a player is said to be needing and wanting minutes, it makes time sound like something a player can collect and store. Like filling up one of those massive jars you used to see on bar counters with pickled eggs. But obviously minutes is a given when talking about time because, clearly, everything occupies minutes. A player cannot come back from injury outside of the space-time continuum. So it isn’t necessary to state a player ‘needs minutes’ to get back to full fitness, he just needs to get fit and, yes, minutes, hours, days and months will be required for that to happen, unless the player is a traveller in both time and space.

4) ‘Football matches’
As in “they just need to win football matches”. This is interchangeable with “he just needs to win games of football”. When talking about football, it is pointless to remind us you are talking about football and not anything else. The struggling football club manager never needs to win games of cricket, so we don’t need this stating time and time again, Jeff.

5) ‘For me…’
As in “for me, he doesn’t run enough, Jeff” or similarly, “it’s just my opinion…” As football media grows exponentially, this has become an almost unthinking default for pundits. When you are giving your opinion about anything, you don’t need to remind us it is your opinion because it is clearly coming out of your mouth. And we know that your opinion is exactly that, yours, and we know other views exist too. So you only need to define whose opinion it is, if it is not your own.
6) ‘No disrespect to…’
“Do they want to be playing Grimsby every week…no disrespect to Grimsby.”

This one has been around for a while but it has now leaked into every corner of the game from pundit to presenter, manager and players, as all concerned get scared by potential Twitter storms caused by seeming superior, snobbish or dismissive. Obviously, this is usually exactly what they are being, so why not have the courage of your convictions and don’t try and insert a get-out clause. The worse instances have a pundit inserting the transparent ‘no disrespect’  into every other sentence when talking about a player moving from a lower-league club to a big club. It’s not necessary, most of us are not hysterical one-eyed tribal monsters who are going to give you a hard time; and those that are should be ignored.

7) ‘Wag’
Leaving aside the innate misogyny-flavoured sexism of branding actual female humans with this horrible term, stripping them of their humanity by defining them only as an accessory to a man, it was originally an acronym coined around the time of the 2006 World Cup to describe players’ Wives And Girlfriends.

However, in recent times the tabloid press have evolved the term to describe any individual woman who is in a relationship with a male footballer. They may be their wife or their girlfriend, but clearly they can’t be both but hey, if you’re deemed good-looking and you’re hooked up to a footballer you are now A Wag.

But the perving doesn’t stop there; Wag is usually spelled with a capital W as though it is a brand like Heinz or Budweiser and not an actual person, or an actual acronym. Any way you look at it, it is simply horrible and needs outlawing.