Home Aston Villa Wait, who? And how?! England’s one-tournament weirdos 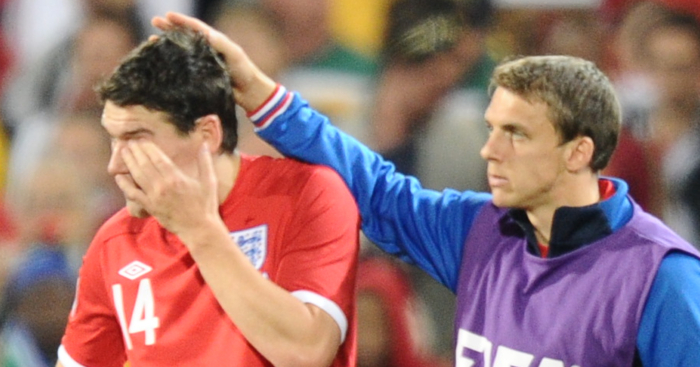 After looking at the players whose star shone brightly for England at one major tournament only to never be seen again, we now look at those whose one tournament was less memorable. No third-choice keepers allowed here, so no place for your Nick Popes and so forth…

Maurice Setters, 1958 World Cup
Former West Brom and Manchester United wing-half Setters never actually played for England, and never actually made it to the one tournament he was selected for. Only 20 of England’s 22-man squad made the trip to Sweden, with Setters and Alan Hodgkinson ready and waiting back home were they needed. They were not.

Gerry Byrne, 1966 World Cup
The Liverpool left-back was one of four unused outfield players in England’s World Cup-winning squad. He would never add to the two caps he won before the tournament, first in a 1963 British Championship defeat and then in a 6-1 tonking of Norway just before the World Cup.

Steve Howey, Euro 1996
If you were to ask me to name three geniuses, I probably wouldn’t say Einstein, Newton… I’d go Adams, Southgate, Campbell… Howey. What a squad England had in ’96. Howey was a perfectly serviceable centre-half in an enormously entertaining Newcastle side, but I’m still staggered that he won four caps for England.

In a move that seems giddily reckless looking back, England named both Adams and Howey in their Euro 96 squad despite the fact both men were recovering from injury. Howey was an unused sub for the opening draw against Switzerland but then promptly injured himself by falling into some nettles on a run and missed the rest of the tournament.

Just think how different things could have been had he rather than Southgate been on the pitch for the fateful penalties against Germany. No more years of hurt. No steady climb to the manager’s job for Gareth. No national M&S waistcoat shortage.

Stephen Warnock, 2010 World Cup
Selected for the trip to South Africa after a tidy if unremarkable season for Aston Villa and eight minutes of international football two years earlier against the might of Trinidad and Tobago. ‘Fabio Capello’s eye for detail is unwavering,’ noted Oliver Brown in the Telegraph, ‘but the mind boggles as to what subtle nuances the England manager divined from Stephen Warnock’s eight minutes of fame against Trinidad and Tobago.’

The intervening years have thrown up few clues.

Martin Kelly, Euro 2012
When Gary Cahill smashed his jaw on Joe Hart’s shoulder in a 1-0 friendly win over Belgium, England found themselves in need of a centre-back. No matter. Rio Ferdinand had been left out of the original squad for “football reasons” and definitely not because of the racism court case involving his brother Anton and John Terry and would therefore surely now get the call. Sure, Ferdinand was by now past his absolute peak, but he had 81 caps and would surely do a job if required.

No. Instead, Roy Hodgson went for Liverpool defender Martin Kelly, who had one cap and had played a whole ten Premier League games in the previous season.

“What reasons?????!!!” asked an incredulous Ferdinand on what tabloid newspapers were still at the time contractually obliged to refer to as ‘social networking site Twitter’.

Kelly is now at Crystal Palace and still waiting to add to his solitary England cap.

Rickie Lambert, 2014 World Cup
In a season that ended with some gangly young Spurs striker scoring his first three Premier League goals in three successive games, Lambert had a perfectly decent 2013/14 campaign for Southampton. He scored 13 Premier League goals to go with the 15 he’d managed the year before in his first top-flight season.

It still says plenty about how long four years is, though, that this was enough to earn him both a move to Liverpool and a place in England’s World Cup squad.

Lambert came off the bench for the last rites of England’s 2-1 defeat to Uruguay and made four more brief substitute appearances after the tournament before his international career quietly came to an end.