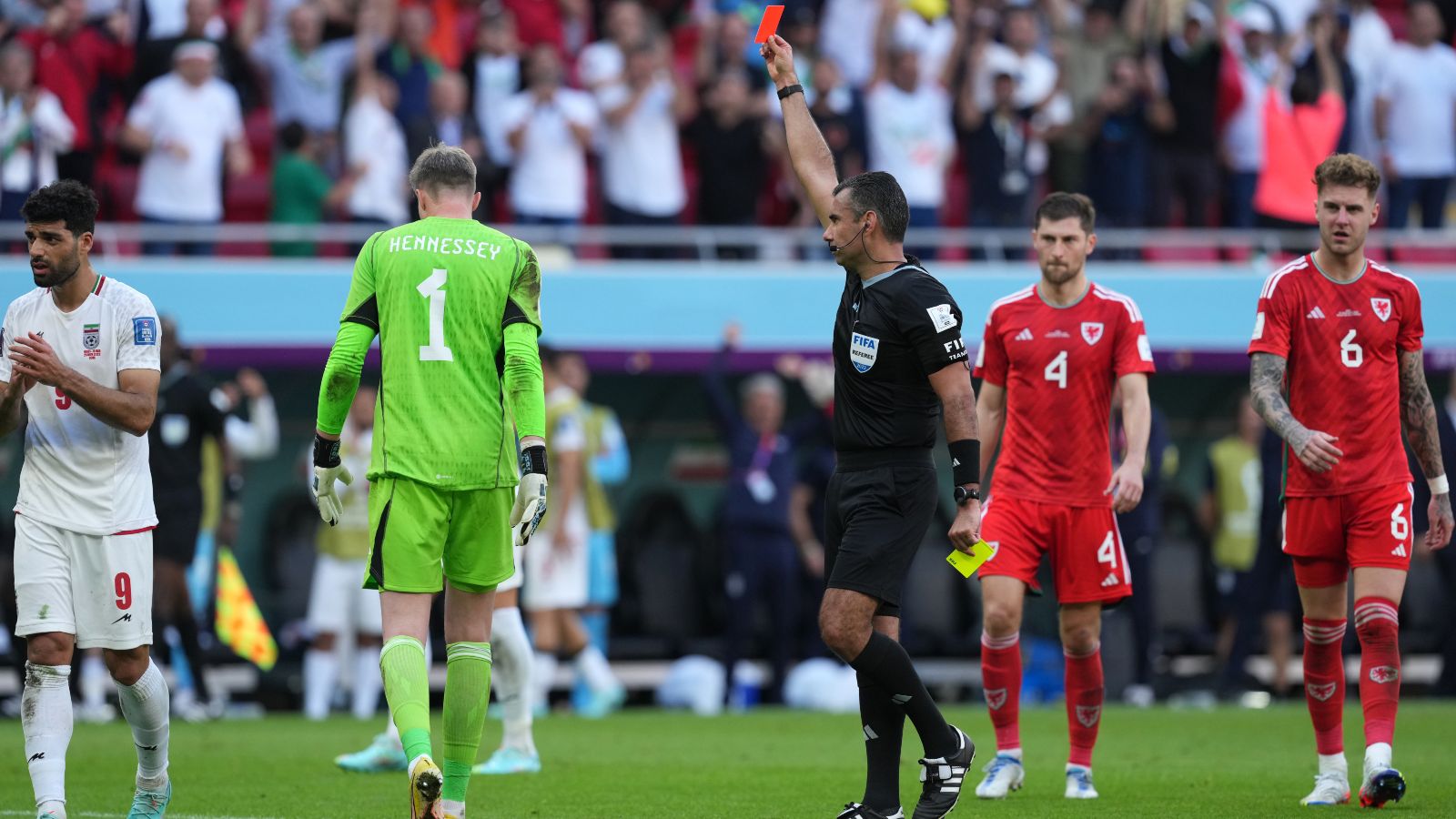 Iran scored twice in stoppage time to boost their hopes of qualifying for the World Cup knockout stages with their deserved win over Wales.

Rouzbeh Cheshmi and Rezaeian Ramin netted in stoppage time to secure Iran only their third World Cup victory and one they fully deserved at the Ahmad Bin Ali Stadium in Doha.

Wales knew this as a must-win game after they drew against the United States, but Rob Page’s players were second-best throughout and lost goalkeeper Wayne Hennessey to a red card in the final ten minutes.

Wales will now have to beat England in their final group game on Tuesday to reach the round of 16, something they have not achieved since 1984.

Skipper Gareth Bale became Wales’ most capped men’s player in his own right by winning his 110th cap, overtaking Chris Gunter who was among the substitutes.

The early 1pm start local time meant that the temperature was around 30 degrees Celsius at kick-off, conditions that suited Iran – one place below Wales in the world rankings – more.

Wales made one change from the side that drew 1-1 with the USA in their first match at the World Cup finals for 64 years.

Kieffer Moore, who sparked Wales’ second-half revival after being introduced at the interval, replaced Daniel James as boss Page resisted the opportunity to start Joe Allen after hamstring trouble.

Iran goalkeeper Alireza Beiranvand, injured against England, missed out due to FIFA’s concussion protocols and Hossein Hosseini replaced him.

Hosseini was unconvincing in England’s 6-2 win and Moore had promised to punish Iran’s aerial fallibility.

Iran’s players had failed to sing their national anthem in their World Cup opener, sparking headlines around the world.

Their silence was viewed as a show of unity for mass anti-government protests in their country. Some players did sing the anthem this time, although many of the Iranian supporters appeared to jeer it.

Moore was initially as good as his word to win an early header which set up Neco Williams for a shooting opportunity.

The Bournemouth man also stretched to reach Connor Roberts’ 12th-minute cross, diverting it straight at Hosseini and catching a stray Iranian boot in the face for his troubles.

But this was a different Iran to the one that had been timid against England from the start.

Sardar Azmoun fired straight at Hennessey and their tenacity and dynamism in transition almost produced the first goal.

Roberts’ careless pass across field was picked off and Azmoun and Ali Gholizadeh worked the space for the latter to score.

Gholizadeh, however, had taken the final pass in an offside position and a VAR check spared Wales from falling behind.

Bale, a bystander for the opening half-hour, ambitiously tried his luck from distance and Harry Wilson saw his deflected effort loop over.

The greater threat came from Iran, though, Azmoun heading wide before the Bayer Leverkusen forward was inches away from connecting with Saeid Ezatolahi’s magnificent cross.

Hennessey held Ahmad Nourollahi’s effort on the stroke of half-time and Wales were relieved to get to the break level.

Wales had a huge double let off as Iran started the second half as they had finished the first.

Azmoun broke clear to rattle the woodwork and in the same attack Gholizadeh curled a wonderful effort onto Hennessey’s other post.

Page sent on James and Brennan Johnson for Roberts and Wilson and went for a system change to four at the back in an attempt to change the momentum of the contest.

But Hennessey came to the rescue by getting fingertips on an Ezatolahi low drive that was destined for the bottom corner of his net.

Allen came on for the final push and Hosseini tipped over Ben Davies’ drive, but Wales were reduced to 10 men four minutes from time when Hennessey rushed from his box and clattered into Taremi.

Guatemalan referee Mario Escobar branded a yellow card at first before upgrading it to red after a VAR check.

Iran seized on their one-man advantage as Cheshmi pounced on Allen’s poor clearance to fire home from 20 yards before Ramin rubbed salt in Welsh wounds with a delightful chip over replacement goalkeeper Danny Ward.

READ MORE: Gareth Bale goal proves Wales are ‘still here’ and so is the World Cup…