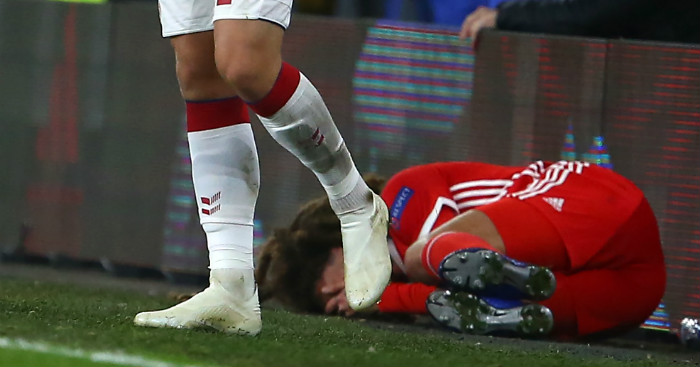 Wales manager Ryan Giggs feels Ethan Ampadu had been the victim of ‘a cheap shot’ during his side’s 2-1 defeat to Denmark.

Ethan Ampadu was caught by a poor high challenge by Kasper Dolberg that pushed the Chelsea youngster into the advertising hoardings.

That tackle sparked a melee and prompted Giggs to voice his feelings to Denmark boss Age Hareide.

“I just thought it was a cheap shot,” Giggs added. “You have got a lad just turned 18 who broke his leg when he was 17. It was a late tackle.

“I realise we are not playing tiddlywinks. It is a competitive game, and there are going to be tackles, which is part of the game and I like that.

“But for a young lad who has been injured badly recently, it was a cheap shot. That’s why I reacted, and I was proud of the players how they reacted, protecting a young player, which is how it should be.

“It shows that they care and shows they are not going to be bullied, and I like that in a team.”

Asked about Dolberg’s challenge, Denmark manager Hareide said: “If you knew him, he is one of the nicest kids you could ever think of. He wouldn’t harm a fly.

“The boards were too close to the line. It wasn’t the knock from Dolberg, it was the boards that put him (Ampadu) to the ground.”