Home All The News Wales 3-1 Finland: That’s Moore like it 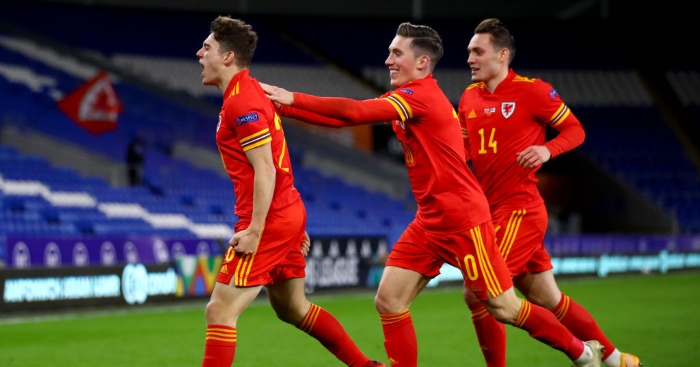 Wales achieved promotion to the top tier of the Nations League with a 3-1 win over 10-man Finland in Cardiff.

Harry Wilson, Daniel James and Kieffer Moore were on target as Wales moved up to League A and virtually guaranteed themselves a 2022 World Cup play-off spot.

Teemu Pukki had halved the deficit to set up an anxious half-hour for the Dragons, but Moore’s header six minutes from time eased Welsh nerves.

Finland needed to win to take top spot in Group B4, but they were forced to play with 10 men for 78 minutes after Jere Uronen hauled down Wilson with the forward through on goal.

Uronen had failed to deal with Danny Ward’s long goal-kick and Spanish referee Jesus Gil Manzano was quick to show the red card.

Wales were unbeaten in 10 competitive matches, a record-matching run in their history. They had also kept seven successive clean sheets in that sequence.

They went into the game with a one-point advantage over opponents who had won four games in the competition since a 1-0 Helsinki defeat to Wales in September.

Gareth Bale was declared captain, while Wales made three changes from the side which edged out the Republic of Ireland.

Connor Roberts, James Lawrence and Wilson came in with Neco Williams, the suspended Ben Davies and David Brooks dropping out.

Caretaker boss Robert Page persevered with the 3-4-3 system that had spluttered on Sunday before a formation change brought Brooks’ winner.

Finland were without suspended skipper Tim Sparv and striker Joel Pohjanpalo, who broke an ankle during Sunday’s 2-1 win in Bulgaria.

The visitors appeared anxious from the start with Daniel O’Shaughnessy’s fifth-minute error allowing Bale a shooting opportunity from a tight angle which goalkeeper Lukas Hradecky smothered.

Uronen’s dismissal tipped the scales firmly Wales’ way, but O’Shaugnessy should have done better when left unmarked at a corner.

Welsh pressure was rewarded when Bale stole away from Joona Toivio and slipped in Wilson. He finished in clinical fashion for his fourth international goal.

Wales’ previous four Nations League wins had been by a 1-0 margin, and this was the first time they had scored two in a game since beating Hungary 2-0 to reach Euro 2020.

Bale was withdrawn just after the hour mark with Wales seemingly in cruise control, but Finland had hope when Pukki found space in the penalty area to fire home.

But Moore headed home James’ cross to put the issue beyond doubt, and Finland knew it was not their night when Pukki struck a post moments later.