Home All The News Wales 0-1 Uruguay: The Giggsymoon is over… 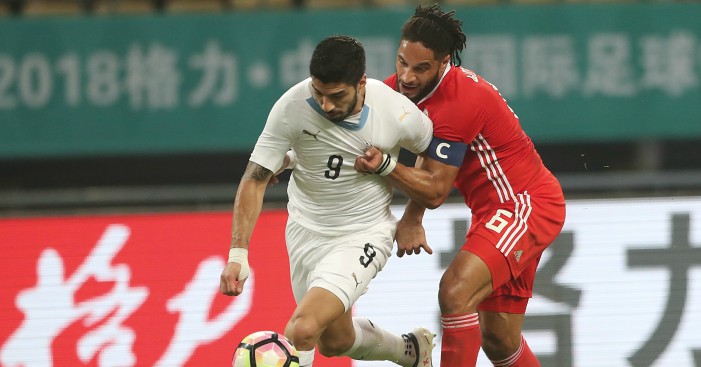 Wales were unchanged for the China Cup final against Uruguay in Nanning.

Ryan Giggs kept faith with the side which thrashed China 6-0 in their semi-final, meaning Bale was set to win his 70th cap and skipper Ashley Williams his 78th.

Wales and Uruguay shared a goalless first half in the China Cup final at Nanning.

Luis Suarez twice went close to opening the scoring for Uruguay, striking the post on both occasions.

Andy King tested Fernando Muslera twice, while  Bale brought a fine save from the Uruguay goalkeeper right at the end of an entertaining first period.

Cavani gave the South Americans the lead four minutes into the second half with a simple tap-in from Cristian Rodriguez’s cross.

Bale, who scored a hat-trick as Wales beat China last Thursday in Giggs’ first match in charge, said the team were disappointed to have lost the match but insisted they could still take plenty of positives from their trip to the Far East.

He told S4C: “Obviously it’s not the result we wanted. We thought they were there for the taking. We had chances but their keeper made some very good saves as well.

“Ultimately we’re disappointed, we felt we could have got more out of the game but it wasn’t meant to be.

“We’ll keep learning, we’ll keep trying to progress and when the major games come around in the qualifiers, we’ll be ready.”

As well as Giggs’ debut in the Wales hot-seat, the tour afforded several players the chance to make their international debuts and others to gain further experience at the highest level, and Bale believes that can only be good for the future.

He said: “It’s been important. There’s a lot of positives to take out and a learning experience for us all.

“I think it will stand us in good stead for the future and I’m sure we’ll win many more games.”

Quiz: Can you identify these former Miami Open winners? (Tennis365)

Is Benoit Paire currently the most entertaining player on the ATP Tour? (Tennis365)

Gallery: The beauty of Augusta, home of the Masters (Golf365)