Home F365 Says Walker-Peters an emblem of these ascending Saints… 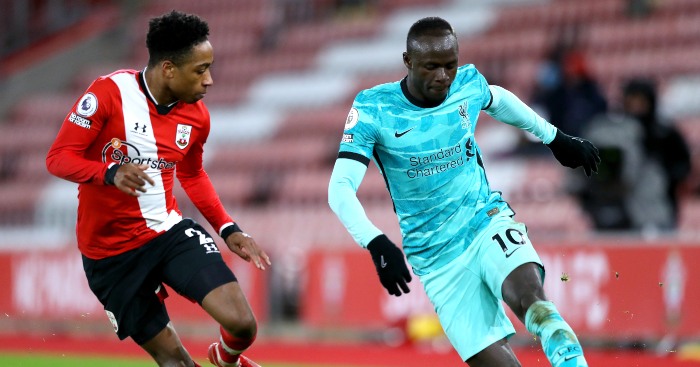 Kyle Walker-Peters was unwanted and underused at Tottenham, but he has been a revelation on the south coast…

In a bleak mid-winter when fatigue and a lack of quality has been exposed across the Premier League, the image of Southampton manager Ralph Hasenhüttl on his knees, sobbing with relief after his team’s 1-0 win over Liverpool, offered a defining moment for a season that has often lacked them.

The season has had its fair share of wild and wonderful results – Villa’s 7-2 demolition of the champions springs to mind – but the lack of fans has made almost all these wondrous moments feel slightly empty. Switching to a channel without the pumped-in, EA Sports-summoned, virtual crowd reminds viewers of the hollow, slightly farcical nature of what they’re watching.

The Saints manager has himself lamented the lack of atmosphere, but he’s also proved capable of acting as a one-man crowd. When asked whether his manager was an emotional character, match-winner Danny Ings replied with a sharp “yes”. The Austrian’s full-time exultation was a public mixture of joy, anguish and release after he claimed his first points against a Jurgen Klopp side at the fifth time of asking.

Hasenhuttl was one of the Premier League’s men of 2020 as Southampton’s results saw a sharp upturn and their style of play became more defined. The Saints were one of the chief beneficiaries of April’s ‘Project Restart’ and their verve and confidence has continued this season, picking up 14 points more than they had by this stage of last season. No side has improved more.

One of their key performers throughout 2020 has been Kyle Walker-Peters, whose arrival last January heralded a shift in the team’s comfort in possession. Walker-Peters uses the ball in a calm and effortless manner, belying his youth and inexperience. The right-back is equally comfortable marauding forward on the overlap as he is shifting the ball infield and acting as an extra midfield outlet for his teammates.

The accusation from those in the world of youth football has been that Tottenham – even before the arrival of the experience-reliant Jose Mourinho – has all the gloss and polish of a modern academy, but without any real intent to bring these players into the first team. More often than not, Walker-Peters travelled with Spurs squads as a spare man and wasn’t included in the matchday 18.

Kyle Walker-Peters (97) on loan to Southampton. Chance to finally play kickstart his senior career, hopefully a permanent move for him there in the summer + importantly, finally clarity that his career belongs away from Spurs. Allows Cedric Soares to leave. https://t.co/s3sXFtoFBN

Hasenhüttl has largely credited an almost-reborn Jannik Vestergaard – the Saints’ stand-out defender until his recent injury lay-off – with improving his team’s work in possession, matching their snarling desire so often seen when hunting the ball back from their opponents.

Meanwhile, Walker-Peters has quietly gone about his business from full-back since arriving on loan from Spurs. Both he and the Dane are truly modern defenders, willing to play their way out of tight situations, or knock it to a teammate and play through the press with an effortless one-two.

But it wasn’t just his comfort on the ball that was on display against the champions; his defending was crucial in shutting down Sadio Mane, the only one of Liverpool’s tremendous trio of forwards that looked like conjuring something for the away side. The Senegal international came with a bag of tricks and was sent packing by the diminutive defender, bag and all. When hanging on against a team of their calibre, some strong, last-ditch tackles are often the difference between victory and defeat.

If there is anything to bemoan, it’s the incredible right-back depth which stands in the way of international honours. To forge a path into the England set-up would require the young defender to displace Reece James, Kieran Trippier, Kyle Walker and Trent Alexander-Arnold, who was substituted at St Mary’s after giving the ball away a season-high 38 times in the match.

Securing the former Tottenham man’s permanent signature in the summer was emblematic of Saints’ shift towards the sensible transfers of old. The club’s recruitment strategy appears totally in line with the manager’s vision and his style of play again.

The lockdown of last March emphasised this harmonious relationship, as the Austrian even presented the club with a dossier on implementing his core beliefs across the club’s youth teams – making the shift easier for young players brought into the first team. On Monday night the bench included eight academy players, the most senior of whom was Yan Valery with a meagre 35 Premier League appearances.

Saints fans are no longer campaigning for transfers as the large majority once again trust in the club’s ability to find the right player for the right position. Reshuffles at boardroom level have seen a definite upturn in success in the transfer market and after years of drifting, it appears the club has finally found its feet again. Walker-Peters is just one success story of many.