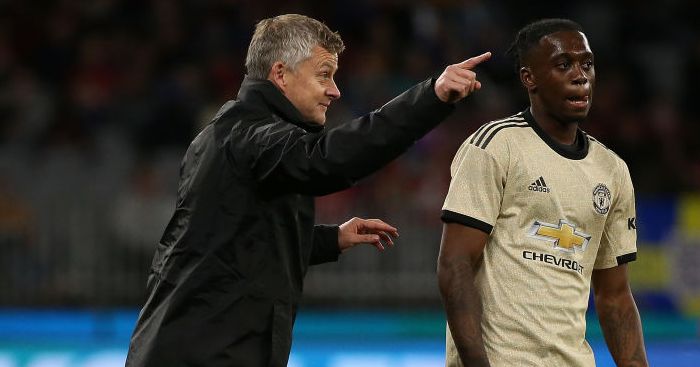 Aaron Wan-Bissaka has denied that it was “difficult” to “focus” while speculation over his move to Manchester United was rampant.

The right-back has already impressed in pre-season, settling well into such daunting surroundings.

Although he was “exactly the type of player” Ole Gunnar Solskjaer wanted, there were some doubts as to how he would cope.

“I try not to focus on that side, for me it is just about developing as a player and my ability to help the team going forward,” he said of the pressure of joining United.

“It wasn’t difficult [to focus], I was not focused on that really. I do not focus on speculation. I just keep my head down and keep doing it on the pitch.

“Over the summer there was a lot to go through. But it is easy for me to block out, the main thing is just playing football.”

England U21 manager Aidy Boothroyd shone a spotlight on Wan-Bissaka’s mentality by blaming the defender’s poor performances at the U21 Euros on “speculation” which “is bound to turn your head”.

“I haven’t spoken to him about that,” the 21-year-old said, before moving onto his early days at Old Trafford.

“I have settled in well, the boys have been great,” he added. “I was surprised, literally from the moment when I walked in everyone has been talking to me, encouraging me with advice. That has helped me a lot.”

Wan-Bissaka also paid tribute to Wilfried Zaha, whose own experiences of moving from Selhurst Park to United could come in handy.

“When he knew that I joined he just told me to play without fear,” he said. “I have come here as a new signing and he said, ‘Just play your game and do what I did last season.’

“He was happy for me. He said I deserved it and I should continue working hard and doing what I do.”