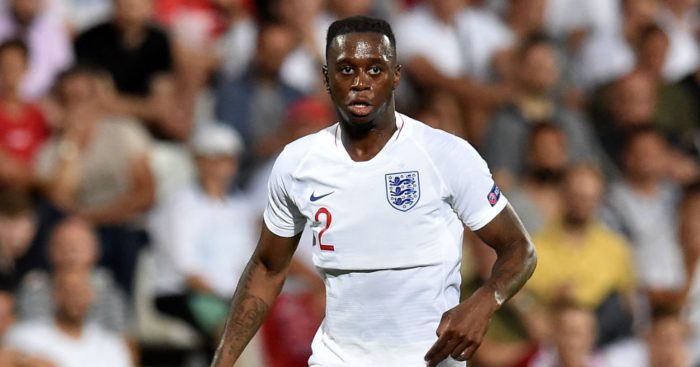 Aaron Wan-Bissaka’s omission from England’s UEFA Nations League squad caused a substantial backlash. This was – at worst – the second-best English right-back in the Premier League last season being unfairly ignored because of who he played for. Never mind that Gareth Southgate had dropped his first-choice right-back from the World Cup and called up a European Cup winner (Trent Alexander-Arnold) and a Premier League winner (Kyle Walker).

Southgate’s reasoning was perfectly sound. With England considerably more well-stocked at right-back than any other position, it made sense for Wan-Bissaka to go to Italy with the Under-21s, start for the pre-tournament joint favourites and gain successful experience at a major tournament as England tried to bring football ho…

Yeah, about that. Wan-Bissaka did indeed start against France in England’s first group game. He was comfortably England’s poorest performer, ceding possession regularly and scoring a calamitous late own goal. For England’s second game, Jonjoe Kenny was preferred and England tumbled out of the competition with a game to play. It’s good to get that disappointment hammered into players early.

More interesting – and instructive – than Wan-Bissaka’s performance was Aidy Boothroyd’s explanation of why his right-back might have struggled. England’s manager was given the chance to dismiss the impact of Wan-Bissaka’s potential move to Manchester United, but chose not to.

“I could dodge it by saying ‘You have to ask him that’ but I won’t,” Boothroyd said. “I think when you are nearly going to move and all the things that would go through an older person’s head, who is more experienced in life, it would be difficult for them to cope with. For a young player who all he knows is Crystal Palace academy, Crystal Palace first team. it would be daft not to say that in some way he must think about it. I would not be truthful if I told you anything other than that.”

Boothroyd understandably received plenty of flak for his candid assessment of Wan-Bissaka’s performance, and some accused him of hanging a young player out to dry. But it is intriguing that Wan-Bissaka’s worst performance of a short career came in the highest-profile non-Crystal Palace match and in the midst of a career-defining move. And intriguing too that Boothroyd specifically mentioned Wan-Bissaka’s small football bubble.

Wan-Bissaka was born and raised in Croydon, attending Good Shepherd primary school less than five miles from Selhurst Park. He joined his current club at the age of 11. He has family, friends and support networks close by. Most importantly, when Wan-Bissaka broke into the first team, nobody knew what to expect from a winger-turned-right-back. That lack of expectation provides a freedom of expression that can be powerful for a young player. It’s an uncharitable assessment – you can only beat what is in front of you – but Wan-Bissaka has flourished inside a comfort zone.

His maturity – quiet, thoughtful, grounded – and consistent excellence last season can trick you into overestimating Wan-Bissaka’s experience. He has played only 42 career league games, plus four more in cup competitions. More instructive still is that Phil Foden is the only player in England’s current Under-21 squad with fewer caps at that level. He is a newbie.

The hardest trick to learn in elite sport is to relax under pressure. The more crucial or high-profile the situation, the more important it is to relax and the harder it is to do so. It is why footballers increasingly use visualisation as a mental tool. Picture yourself in a scenario – defending a winger, taking a shot, taking on your man – and you can prepare for it. Physical and mental preparation is the key to staying relaxed. Experience of identical or similar situations clearly forms part of that preparation.

That partly explains the accused big-club bias when England squads are named. There is a pressure that arrives when playing for your country in a major tournament that is mirrored when playing for a Premier League team for which every defeat is disaster. Every mistake is magnified. That’s why the best 23-man international squad is not necessarily formed of the best or most in-form 23 players.

Wan-Bissaka may soon have to get used to that pressure. Joining Manchester United has always created its own pressure, but joining this Manchester United in this state comes with almost unique demands. There is a desperation from supporters for their club to improve upon their pitiful performance that manifests itself in a clamour for new signings. That in turn raises the stakes on the success of those signings.

Since June 2011, Manchester United have spent approximately £870m on new players, including 14 for more than £30m. At most, one of those 14 has improved their reputation at Old Trafford – Luke Shaw – and even he suffered the ignominy for having his question and desire questioned by Jose Mourinho. There is something ingrained in the club that brings their players down to a miserable mean. Wan-Bissaka has the challenge of breaking that pattern. It is a daunting task for a young man with little football experience outside SE25.

If youth and inexperience should guarantee added protection from criticism, a social media search for ‘Marcus Rashford’ proves otherwise. Like Wan-Bissaka, Rashford broke into the first team thanks to injuries and quickly flourished. One disappointing half season was enough for the pitchforks to come out for a 21-year-old Englishman clearly trying his best. Rashford and Wan-Bissaka were born just 27 days apart, and Rashford has the goodwill of being a local lad on his side.

None of this is to say that Wan-Bissaka will not be a roaring success or go on to establish himself as first-choice right-back for elite club and country. He is more mature than his years, a quiet and thoughtful young man who processes things calmly and effectively. He has dealt brilliantly with the step up to Premier League life.

But the pressure is about to be ramped up. In February 2019, Wan-Bissaka went back to his old primary school and was shocked by the fevered reaction of the pupils. “A lot of the time I can’t really get my head around it, but it shows I’ve come a long way,” he told the Guardian’s Dom Fifield.

Now is the time for Wan-Bissaka to get his head around it, process it and manage it. Graeme Souness once said Jermaine Jenas had struggled at Newcastle having moved from Nottingham Forest because of an inability to cope with the goldfish bowl. Life at Manchester United is a shark-infested pool. From the screams of kids to the groans of season ticket holders.