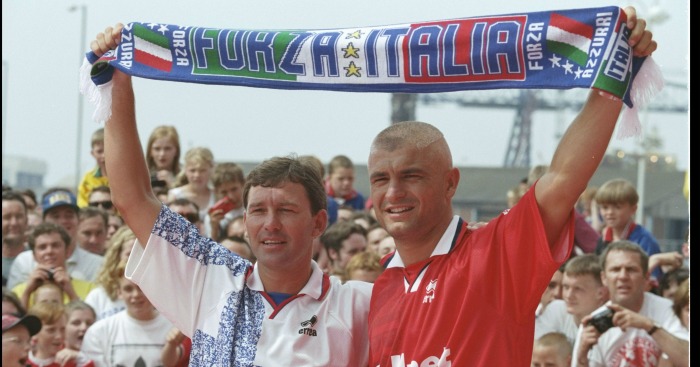 Life was good for Ricky van Wolfswinkel on the evening of 17 August 2013. The temperature in Norwich was a pleasant 19 degrees and the Dutch striker had just scored on his debut for the Canaries in a creditable 2-2 draw with Everton. The newly promoted Norfolk team had spent a club record fee of £8.5 million on a player who came highly recommended, and a debut goal was an immediate repayment of the faith the club had shown. But 17 August was as good as it got for Ricky. In his next 18 Premier League appearances for the club he managed just three more shots on target and ended the campaign with 25 appearances and just that single goal against Everton on the opening day. Norwich were relegated and van Wolfswinkel was exiled to Ligue 1 in 2014–15 and La Liga in 2015–16, his presence at the club too painful a reminder of the broken dreams of 2013.

Let’s clarify: winning games will indeed keep you in the Premier League, but relying on newly purchased strikers to do so is a less than reliable method.

The list of top-scoring players for relegated Premier League teams contains just one player with 20-plus goals, Andrew Johnson for Crystal Palace in 2004–05, although it should be noted that a hefty 11 of these came from the penalty spot. Charlie Austin’s 18 for QPR in 2014–15 is a recent example, but he had already been at the club as they came up from the Championship, so wasn’t a new arrival. The exception that proves the rule, really, is Fabrizio Ravanelli at Middlesbrough in 1996–97. The silver-haired Italian scored 16 goals for the big-spending, flu-susceptible North East side. That said, three of his goals came on the opening day and six of his seasonal total (38%) had come by the first week of September.

Let’s forget about individual players, and look at goals and goals conceded on a wider scale. Nine of the lowest-scoring teams in each of the 26 seasons still managed to avoid the drop, despite troubling the opposition defence less often than any other team in the division that season. Special mention should go to defensive grumbler George Graham who managed Arsenal to a tenth-place finish in 1992–93 with a mere 40 goals and then took Leeds to 11th four years later despite scoring just 28 goals in 38 games, a delightful campaign that included nine goalless draws. One small caveat to the ‘who actually needs goals’ campaign is Aston Villa’s relegation in 2015–16. This was the fourth successive season that the lowest scoring team had gone down, the first time it had happened for this many campaigns in a row.

Contrast the lowest scoring teams with the fortunes of the teams with the worst defences in each Premier League season and you can see why teams which think they will be battling the drop should focus on defence. Only once in Premier League history has a team with the worst (or joint-worst in this case) defence avoided the drop and that was Fulham in 2006–07. Their survival was slightly dubious, given that they did so thanks to a 1-0 win against a weakened Liverpool team who were resting players ahead of the Champions League final, a result which confirmed that Lawrie Sanchez’s dreary spell at the London club was extended for a few additional months.

Other than Fulham, it’s a sorry list of teams that struggled on a titanic scale, from Swindon’s 100 goals conceded campaign of 1993–94 (congratulations to Shaun Taylor who was the only Robins player to be on the pitch as all 100 goals went in) to the abject Derby team of 2007–08. And let us not forget the Fulham team of 2013–14 which went through three managers (one of whom, Felix Magath, tried to treat injuries with blocks of cheese) and 39 players. A litany of dismay and disappointment that could all have been avoided with a stronger defence. The message could not be any clearer: don’t buy strikers.

For the record, Norwich equalled their club record fee for Van Wolfswinkel two seasons later when they signed striker Steven Naismith from Everton. The Scot scored once (also on his debut) in 13 appearances for the Canaries and was relegated. Sometimes you just have to learn.

This is an extract from Opta Joe’s Football Yearbook 2016 by Duncan Alexander, published 11 August, Century, Trade Paperback, £12.99. You can (and should) buy it here.