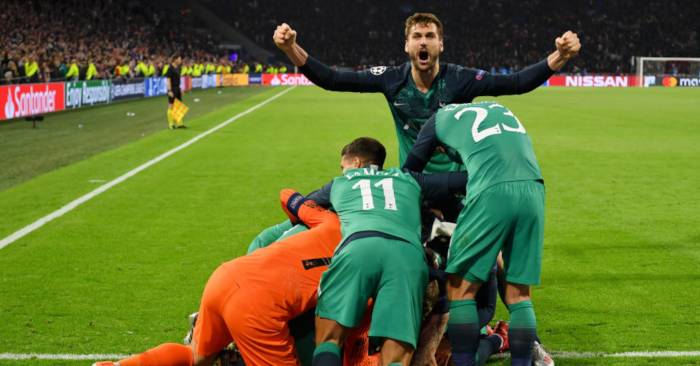 At half-time it felt like the frenzied insistence on talking about comebacks from 3-0 deficits was utterly ridiculous, a cynical ploy to stop viewers from switching off. On the evidence of the previous 135 minutes against Ajax, there was almost no chance of pulling off a Liverpool-style revival; they had been comprehensively outplayed and it was time to think about the summer and much-needed investment. The Ajax fans were singing, the Tottenham fans were muttering about Victor Wanyama and a sixth defeat in seven games felt like exactly the right way to end this illogical season of somewhat success from the north London side.

We really should have known better. This is the Spurs side that has – the curious cruise against Borussia Dortmund aside – been pretty much minutes from Champions League exit from the second it kicked off. And yet they have survived. Again and again and again. They have stumbled, they have bumbled and now here they are in a Champions League final. While those on Merseyside giddily talk of destiny, there are some in north London who want a word.

They lost their opening two games and manager Mauricio Pochettino took them to Eindhoven, warning that “if we are not capable of winning this type of game we cannot win the title”; they drew 2-2 and we wrote that they had been ‘all-but ousted from the Champions League in October’. They were then all-but ousted from the Champions League in November and then December, with winners and equalisers coming in the 89th, 80th and 85th minute. Against Manchester City in April, they flip-flopped between triumph and despair until finally settling on the former via a 93rd-minute disallowed goal from a City side who had taken them apart at the Etihad.

This simply should not have happened. Not when this is a side that has not seen any player investment since Lucas Moura arrived for £25m in January 2018. Not when almost every first-team player survived into the latter stages of the World Cup. Not when they were without a home stadium for two-thirds of the season. Not when they came into this game in horrendous form, seemingly stumbling into a brick wall after a thin squad had been stretched to its limit. Not when they were missing their world-class striker. Did we mention that none of this is logical?

Days after we watched them collapse in a heap of petulance at Bournemouth, they did the opposite in Amsterdam. A molehill turned into a mountain and they responded by finding missing-presumed-empty reserves of energy and resilience, with Ajax visibly rattled by a switch of tactics to incorporate the ‘big man’ up front. In Moura they had a man made for this feted and fated occasion, his clarity of thought, intelligence of movement and sweetness of finish the perfect combination.

“Thank you football. Thank you my players, they are heroes,” said a tearful Mauricio Pochettino after a match that left him on his knees, exhausted and exhilarated. When he recovers he will have quite the task on his hands: How do you go about winning a game in which both teams believe their name must be on the trophy? Right now it feels like tactics might be pointless, and forging a 3-0 lead more pointless still.