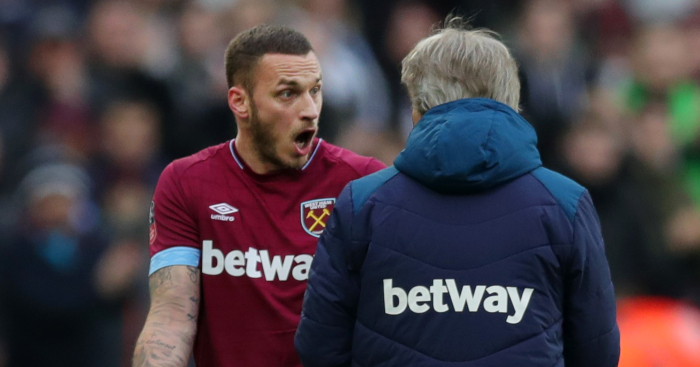 Marko Arnautovic has been dropped by Manuel Pellegrini ahead of West Ham’s trip to Bournemouth.

West Ham face Bournemouth on Saturday but Arnautovic will not feature after Pellegrini decided he was ‘not in the right frame of mind’ to play.

The forward has been the subject of a £35m bid from an unnamed Chinese Premier League club, which The Guardian understands to be Guangzhou Evergrande.

The Hammers rejected that offer, with Arnautovic’s brother and agent Danijel insisting that while the player wants to leave, he “will give everything to the club” until he does so.

Pellegrini has, however, decided that the saga ‘has affected’ Arnautovic’s ‘focus’, and has therefore dropped him.

The Austrian ‘said sorry to the rest of the squad after training on Friday for pushing for a move,’ but The Guardian stress that he is neither on strike nor being ‘ostracised’ by his teammates.

It is thought that West Ham will remain firm in their attempts to keep Arnautovic unless they receive a £50m bid.

Callum Wilson of Bournemouth and Celta Vigo’s Maxi Gomez have been linked as possible replacements in the event of a sale.